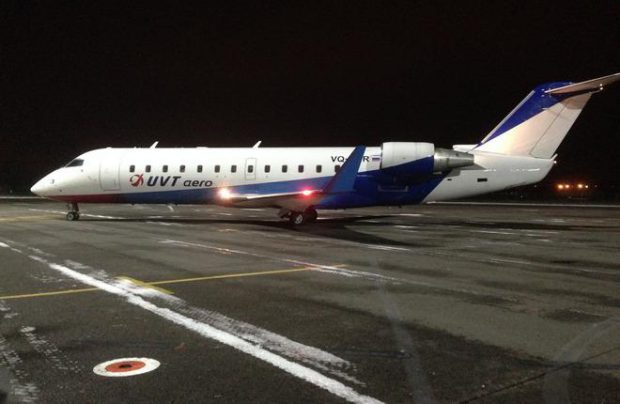 UVT-Aero has launched flights from Kazan to Zhukovsky in November 2016 (Photo by ATO.ru)

Zhukovsky airport, located near Moscow, remained with international traffic as the only domestic destination to Kazan served by UVT-Aero airline had been closed. The reason is that there is no decision yet to continue its subsidizing. Kommersant daily cited Petr Trubaev, airline’s CEO, saying without the government support the destination would be unprofitable.

Initially the Kazan – Zhukovsky route was meant to be active throughout the winter schedule. Due to subsidizing the carrier managed to set a competitive ticket price.

According to Trubaev, UVT-Aero had been asked by Zhukovsky city administration to launch the destination. It was they who managed to attract subsidies for the flight at the time when the airport served only one destination from Minsk operated by Belavia. As a result the project managed to break even. According to RBC-Tatarstan, the average aircraft load on the route was about 65%.

Trubaev didn’t rule out the possibility that the government will still manage to find the money to subsidize Kazan – Zhukovsky flights. “Practice shows that during the year some companies are unable to fulfill their commitments, surplus funds occur. This is a working process that’s why the process of subsidies redistribution is active throughout the year”, top-manager clarified.

UVT-Aero has discontinued flights on some other destinations where it failed to receive subsidies in 2017. The destinations in question are Kazan – Nizhny Novgorod, Kazan – Voronezh, Kazan – Belgorod, Kazan – Gorno-Altaisk and Perm – Nizhnekamsk. The first three routes were quite popular.

Since mid-February the flights to Tel-Aviv and Astana are expected to open from Zhukovsky. The former is to be operated by a newcomer Pegas Fly.