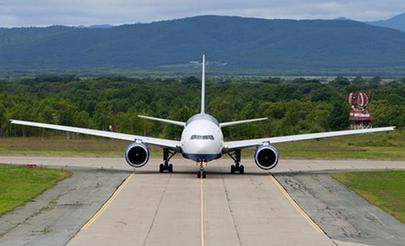 Reconstruction of the runway at Yuzhno-Sakhalinsk Airport, located in the homonymous city at the southern end of Sakhalin Island, is expected to be completed by December of this year. According to the schedule, work on the runway project is slated to begin on May 15.

The search for a contractor for the project has already begun with a bid posting on a government site. According to the bid information, the taxiways and water drainage systems are expected to be redone in addition to the work on the runway. Installment of new lighting equipment is also in the plans. The budget for the project stands at 1.9 billion rubles (24.6 million dollars), expected to come from the regional government budget.

Currently, there is one runway in operation at Yuzhno-Sakhalinsk, measuring 3,400 meters by 45 meters. Among other improvements, the runway is expected to be widened to 60 meters, so as to gain the capability of servicing Boeing 747 widebody aircraft.

In addition to the runway project, the airport is searching for a designer for a new terminal building capable of servicing 800 passengers per hour. The regional government is expected to devote 304.2 million rubles (3.9 million dollars) to the terminal project.

Yuzhno-Sakhalinsk Airport served 849.2 thousand passengers in 2015, a decrease of 0.5% from the year before. Freight and mail carried through the airport in 2015 numbered at 11.8 thousand metric tons, a decrease of about 4% from 2014. Despite the decrease, the airport maintained 12th place among Russian airports in freight and mail carried in 2015.