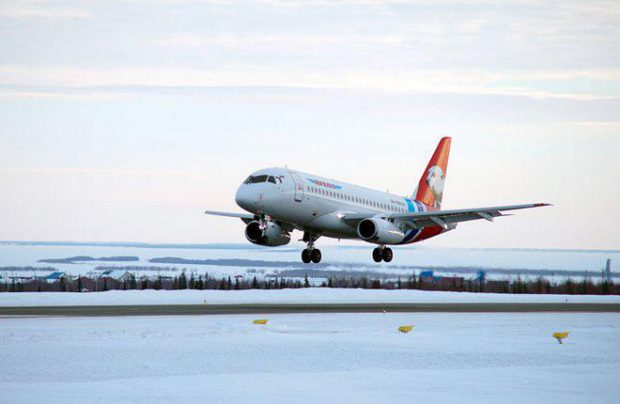 Yamal leased six SSJ 100s for the period of 12 years, and remaining three, for one year (Photo by Yamal Airlines)

Russian regional carrier Yamal Airlines has completed acceptance procedures for a batch of six Sukhoi Superjet 100 (SSJ 100) aircraft leased through GTLK State Transport Leasing Company. As the result, its fleet of the type is expanded to nine jets, all leased through GTLK. Six of them are leased for the period of 12 years, whereas the contract for remaining three is valid for one year, GTLK told Russian Aviation Insider. The spokesperson for the company also added that Yamal is poised to get ten more SSJ 100s before the end of 2017.

The airline has the total of 25 aircraft of the type on order. The letter of intent between the lessor and the carrier was signed at the Moscow MAKS-2015 air show. The SSJ 100s are expected to replace Western-built airliners in Yamal’s fleet. The airline currently operates three Boeing 737-400s, a Boeing 737-500, six Airbus A320s, two Airbus A321s, ten Bombardier CRJ200LRs, two L-410 turboprops and a Bombardier Challenger 850.

The SSJ 100 manufacturer, Sukhoi Civil Aircraft Company, announced plans to deliver up to 40 aircraft to customers this year. Out of this number 35 are new aircraft, and five will find new owners.