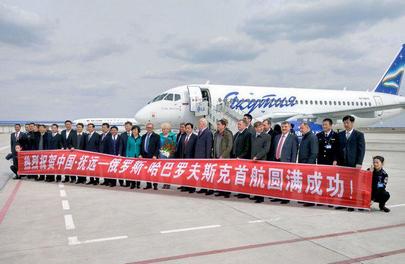 The government of Yakutia is ready to sell a part of its share to a Chinese investor, if it helps the airline to dispense of leasing schemes (Photo by Yakutia Airlines)

Yakutia Airlines, controlled by the government of Yakutia Republic, has outlined its terms for an unnamed Chinese investor.

The investor may either purchase five Boeing 737-800 aircraft for Yakutia Airlines, or top its registered capital with an equal amount. This would enable the investor to participate in the airline’s corporate management and further increase their share. Intergovernmental Russia – China Commission for Investment has included the project in its approved program list.

Yakutia Airlines is resorting to foreign capital for purchasing newer, more efficient aircraft. The carrier also intends to own the aircraft it is currently leasing and refresh its fleet with new Boeing 737-800s, SSJ 100s and Bombardier Q300s.

The fleet renewal program was launched in 2014, with the support of the regional administration. However, in 2016 the administration refused to further finance the airline and asked the federal government to provide state guarantees for the carrier in the amount of 5 billion rubles. The funds were to be directed to ease the airline’s debt burden, particularly in terms of overdue leasing payments.

Yakutia Airlines general director Olga Fyodorova believes that purchasing aircraft would enable the airline to improve its financial performance. Another way to efficiency is attracting an investor from the Asia-Pacific region, with a preference to a Chinese stakeholder. The government of Yakutia is willing to decrease its share in the carrier to 50% + 1 share.

Notably, by September this year, Yakutia Airlines will merge with another carrier owned by the republic’s government—Polar Airlines.

Yakutia Airlines operates a fleet of over 20 aircraft. In January through April of this year, it served 128,900 passengers, down 13.4% from last year.