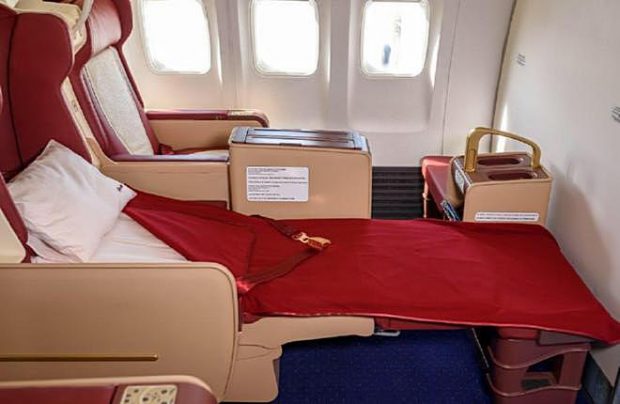 Yakutia Airlines has decided to pamper its passengers with comfort previously unseen in Russia’s scheduled air travel market. Three of its four Boeing 737-800s have been fitted with lie-flat bed-seats (Yakutia)

Russia’s Yakutia Airlines has introduced a new product previously unseen in the Russian scheduled air travel market. To improve the passenger experience and generate more revenue on its lengthy domestic flights, the airline that is controlled by the government of the Yakutia Republic – a diamond mining area in a region some 40 per cent of which lies above the Arctic circle – has fitted some of its Boeing 737-800s with new ergonomic business-class sleeper seats. They unfold into lie-flat beds and also offer a massage function – laidback benefits that are unmatched by any other airline in Russia.

Yakutia Airlines’ general director Vladimir Gorbunov insists that demand for such comfortable travel does exist in Russia and, until now, has not been adequately satisfied, he told Russian Aviation Insider.

He explained that the airline’s decision to equip its B737-800s with the new seats produced by Italian company Zeus, is justified by Yakutia’s unique Russian domestic route network. For example, on flights such as those between Moscow Vnukovo and Yakutsk, the duration of which is 6.5 hours, conventional business-class does not offer sufficient levels of comfort, he believes. “Six and a half hours – that’s long-haul travel. In the Russian [scheduled airline] market we are the first to offer such cabins on narrow-body aircraft,” Yakutia’s top-manager emphasises.

The airline is currently planning for three B737-800s with the new ‘business-comfort’ class. Two have already been refurbished by S7 Technics’ facility at Novosibirsk Tolmachevo airport, which holds EASA Part 21-approval for its in-house design bureau, and the third aircraft is currently in the shop. The fourth B737-800 operated by Yakutia is to be returned to its lessor after its contract expires in 2020.

In the meantime, the economy class cabins on these upgraded aircraft have also changed. Previously the aircraft were fitted with 162 economy and eight business-class seats, but that configuration has now changed to four lie-flat seats in business-comfort and 168 seats in economy class. Current business-class fares will be raised. Gorbunov admits that one of the drivers behind this new offering is Aeroflot’s return to the route between Moscow and Yakutsk utilising B737-800s. In its effort to retain and win customer support, Yakutia has also rejuvenated its on-board menu, resumed serving in-flight alcoholic beverages, and has introduced new red uniforms for cabin crew staff working in the business-class section. These service improvements are seen as an attempt to reverse the carrier’s declining passenger numbers. In the first four months of this year its traffic decreased by 14.6 per cent year-on-year to 167,000 passengers, RPKs slid by 7.9 per cent to 461 million, and the average seat load factor lost 8.6 percentage points to 66.4 per cent. Part of the problem was the revocation of Yakutia’s rights to operate international flights due to its SSJ100 runway incident last October.

Nevertheless, Gorbunov expects that, as from April, from when Yakutia Airlines has been able to resume its international flights, it will reach 2018’s traffic levels by the end of this year. In 2018 Yakutia served 853,000 passengers (down by 1.4 per cent on the previous year) placing it 18th in the ranking list of Russia’s major airlines.