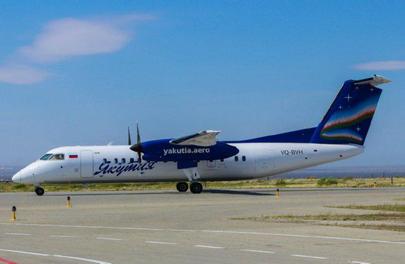 Unlike the first two Q300s in Yakutia’s fleet, the third one is modified for extended range operations (Photo by Alexander Kopylov)

Yakutia Airlines has taken delivery of its third Bombardier Q300. Yesterday, the 50-seat aircraft with tail number VQ-BVH arrived at its base airport in Yakutsk. It is expected to make its first commercial flight for Yakutia this weekend.

Unlike the two Q300s already operated by Yakutia, the new aircraft is a long-range modification. It is fitted with auxiliary tanks and holds 4,647 kg of fuel, 80% more than the standard version. Q300LR’s range is 4,500 km.

Arrival of the Q300s is in line with the carrier’s turboprop fleet renovation. The latest aircraft was produced in 1995 and has been in operation with South African Express Airways, Great China Airlines and Taiwan’s Uni Air. The aircraft is in operational lease provided by American lessor Castlelake for a period of five years.

“Taking into consideration the geographical features of Yakutia (the region stretches 2,500 km from north to south and 2,000 km from east to west – Russian Aviation Insider), and few alternate airports with tricky schedules, the long range modification is a great benefit for us,” Yakutia Airlines’ fleet management director Ivan Vinokurov commented to Russian Aviation Insider.

The first two Q300s, with tail numbers VQ-BVI and VQ-BVJ (both built in 1995), entered service with Yakutia in August and September 2014. The carrier also operates six Antonov An-24s, and since its schedule for intraregional flights for this year was developed with the entire fleet in mind, the airline won’t phase out any of the Soviet-built aircraft just now. The process may start in 2017, as the carrier is considering taking two more Q300s next spring. According to Vinokurov, the management will review the prospects of continuous operation of the An-24s together with the management of Polar Airlines, which operates nine An-24/26s and is preparing to integrate with Yakutia.

“Both airlines take similar approaches to developing the 50-seater turboprop fleet. Polar Airlines also views the Q300 as a perspective replacement for the An-24s, which are becoming morally obsolete. So, we will carefully review our combined route network and analyze our combined demand for Q300s,” Vinokurov summarized.