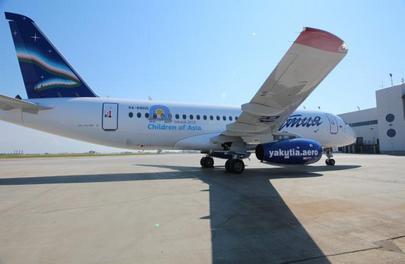 Yakutia Airlines recently added a third SSJ 100 to its summer schedule. The aircraft, produced by Sukhoi Civil Aircraft (SCAC), first took to the sky with Yakutia on June 12 on a route from Yakutsk to Novosibirsk, then Yekaterinburg, and back.

The aircraft was produced in 2012 and received the registration number RA-89021. It was first painted in Armavia livery. However, the aircraft’s first operator was Moskovia, and then Red Wings. The aircraft is fit with a 93-seat configuration, with eight business class seats and 85 in economy.

Moskovia and Red Wings leased the aircraft from SCAC. Toward the end of spring, the producer reclaimed the SSJ 100 from Red Wings, after which the aircraft was taken by the State Transport Leasing Company (known by the Russian acronym GTLK). The new owner transferred the newly acquired SSJ 100 to the new operator at a reduced lease rate in rubles.

The size of the technical reserves denominated in foreign currency equals to 10.526 million dollars. The first two SSJ 100s that Yakutia received (registration numbers RA-89011 and RA-89012) were leased from VEB-Leasing for a period of 10 years with the total lease payments equaling 62 million dollars. This totals 3.1 million dollars per aircraft per year, 90% higher than the rate for the third SSJ 100.

At the end of March, Yakutia, GTLK and VEB-Leasing signed a plan for refinancing the two SSJ 100s that Yakutia has been flying since 2013. It was thought at the time that the company was going to phase these two aircraft out, but since it seems that the carrier has no plans to stop operation of them.

“For the first two aircraft,” according to Yakutia’s spokesperson, ”Yakutia together with the government of the Sakha Republic are planning to achieve refinancing: to transfer the leasing into the ruble equivalent, and we hope to do this as soon as possible. We have a contract with GTLK for five SSJ 100s, including the two that are already in operation, and we are now actively working with the Russian government and the Minsitry of Industry and Trade.”

Yakutia is increasing its fleet of SSJ 100 amid the industry’s, as well as their own, downturn. In the first four months of this year, the airline carried 144 thousand passengers, which is 14% less than the same period in 2015. However Yakutia showed significant growth in its passenger load factor from 67% to 75%, bringing it closer to the industry-wide rate of 76, 5%.

“This aircraft has found a niche in the Far Eastern Federal District,” according to Yakutia’s spokesperson. “A year ago we introduced our Boeing 737-700. Even though the SSJ 100 has smaller seating capacity than the Boeing 737, the SCAC aircraft will fit well into our route network in the Far East, where our aircraft fly long distances. Most importantly, SCAC production is now available in rubles, which allows us to be independent of the foreign currency component.”