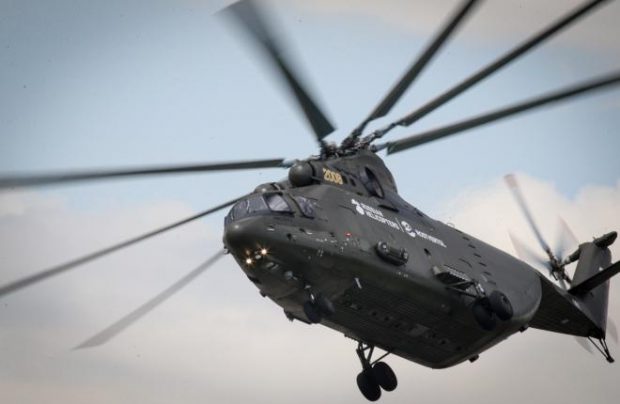 Mil Mi-26, the world’s largest series-built helicopter, is to be re-engined with new Russian PD-12V turboshafts in 2023, creating a rejuvenated version of the giant helicopter, an industry source has told ATO.ru, Russian Aviation Insider’s sister publication.

The Soviet/Russian Mi-26 is currently powered by two Ukrainian Motor Sich D-136 turboshaft engines, the supply of which stopped following the on-going Crimea conflict between Ukraine and the Russian Federation.

Initial flight tests of the re-engined super heavy rotorcraft are due to start in 2023 and approval for the manufacture of the pre-serial batch is expected in 2025. This plan is in line with the statement of Andrey Boginsky, the head of Russian Helicopters, who revealed in May that flight trials of the re-envigorated Mi-26 could start after 2022.

The new engine option – the PD-12V turboshaft – is being developed by Perm-based Aviadvigatel, a subsidiary of Russia’s United Engine Corporation (UEC), as a derivative of the PD-14 turbofan, which is lined up to power the Irkut MC-21, Russia’s advanced twin-jet airliner.

The preliminary design review of the PD-12V was completed last year, reveals an information and technical bulletin issued by Aviadvigatel. Completion of the engine prototype and the beginning of its first test runs are planned for 2020. The development process is projected to be concluded in 2025, the bulletin also points out.

The PD-12V is expected to deliver more power than its older Ukrainian counterpart. It can be uprated to 14,000 hp, while the D-136 offers a maximum of only 11,400 hp. The increased power will provide the helicopter with a larger envelope, especially in high-altitude and hot climate conditions. Despite being heavier, the Russian engine will also be 18 per cent more fuel efficient than the Ukraine engine.

The Mi-26, which entered service in 1984, has a maximum take-off weight of 56 tonnes and can carry up to 20 tonnes of payload. The type is currently in use by the Russian military and by some other countries, as well a string of Russian commercial operators. In the early 2010s, Russian Helicopters upgraded the type to the Mi-26T2 version, which focused mostly on a new avionics suite, reducing the crew count from five to three.

The PD-12V is also a candidate powerplant for the Advanced Heavy Lift (AHL) helicopter being co-developed by China and Russia.