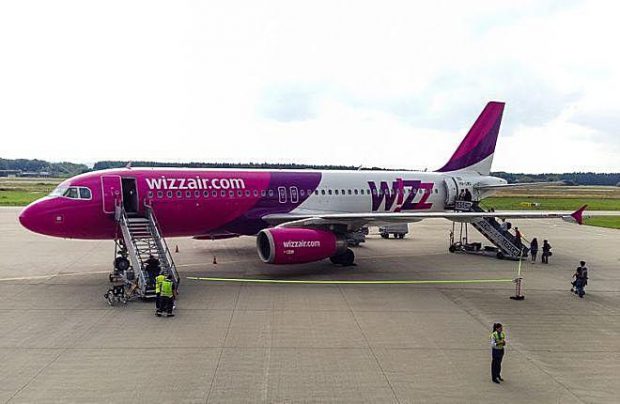 The budget airline is expanding its Moldovan operations, with one million seats on offer next year (Wizz Air)

After six years of operations in Moldova, Hungarian low-cost carrier Wizz Air has announced a further expansion at its Chișinău, Moldova base, by allocating a third aircraft and launching four new December 2019 routes from the country’s capital city airport.

Wizz, which claims to be Europe’s fastest growing airline and the leading low-cost carrier in tiny Moldova, has announced the allocation of a third Airbus A320 aircraft to Chișinău, the country’s only international airport. The additional aircraft, which will join the fleet in December, will enable an increase of frequencies of the budget carrier’s existing routes as well as the start of four new ones from Chișinău to Prague (Czech Republic), Larnaca (Cyprus), Turin (Italy) and Doncaster/Sheffield (south Yorkshire in England) on December 21.

Wizz Air started operations from Chișinău International Airport in 2013 and established a base there in March 2017. When the four new routes commence from December 2019, Wizz will be able to offer 18 routes to 10 countries.

Last year the airline carried 432,300 passengers on its Moldovan routes, representing a 30 per cent year-on-year growth. Given the total number of 2.8 million passengers passing through Chișinău last year, Wizz’s share through the Moldovan capital currently stands at some 15 per cent.

The new routes will add around 150,000 incremental seats in 2020, a development that will help Wizz break through the one million seats mark in the year.

Wizz’s fast-growing operation in the former Soviet Union also includes recent announcements of its first route to Russian regions, from Budapest to Kazan and the winning of permission for its UK-based subsidiary to operate London-Moscow and London-St Petersburg routes starting this October.