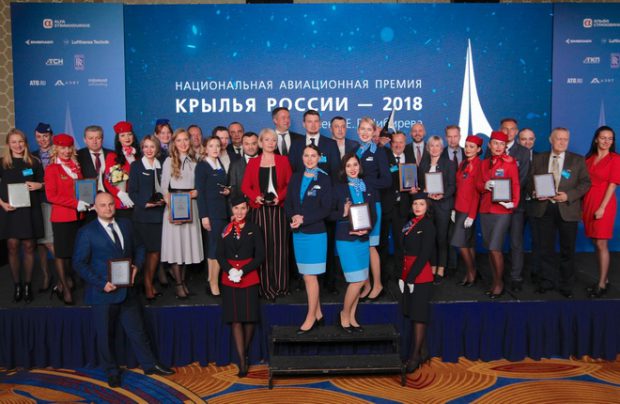 The Wings of Russia Air Transport Awards, the nation’s most prestigious recognition of excellence in Russian airlines and airports, were presented at a gala dinner in Moscow on April 16.

The 22nd annual ceremony of the extremely popular awards scheme saw 12 categories singled out for special recognition this year, as some 100 applicants competed for the honours.

Nominees were drawn from the entire range of airlines and airports operating in Russian air transport, taking into account their size and specialisation and the winners were selected after a secret ballot by a panel of experts made up of handpicked representatives from public organisations, the mass media, the social media, the aviation business, as well as independent experts.

Zhukovsky International Airport won the Event of the Year in Russian air transport category; Belorus’ Belavia received a special prize for its active development of air transport in the CIS; and a special certificate for a successful start-up was presented to Azimuth Airlines. Meanwhile, Azur Air won the People’s Choice prize nomination, an award based solely on the results of an online passenger survey, and once again the UAE’s Emirates was first among the foreign carriers category.

Aeroflot won two of the most prestigious nominations: the main one in the international air service category, while daughter company low-cost carrier Pobeda and Ural Airlines were awarded diplomas. Aeroflot was also declared the leader in the domestic passenger carrier group 1 category (Russian carriers with 2018 domestic traffic of more than four million passengers). The panel commended the work of Pobeda and Ural Airlines in this category too.

Regarding airports, Sheremetyevo International Airport triumphed in the airport of the year category, with Domodedovo and Pulkovo becoming diploma winners.

Yekaterinburg’s Koltsovo International Airport ranked the highest in the airport of the year Group 2 category, whilst the contribution of Simferopol and Novosibirsk Tolmachevo airports were also noted.

Begishevo Airport won the airport of the year Group 3 category (less than two million passengers per year) and Tyumen’s Roshchino and Nizhny Novgorod’s Strigino airports were both nominated in this section.

“It is well known that Russian civil aviation is passing through an extremely difficult turbulent period. It is not a secret that the financial results in the industry leave much to be desired. The airlines’ expenses increased significantly in the last year, and the pace of revenue growth was not enough to cover losses. And although this is a source of some concern, there are some positive factors that provide confidence in the future. These include: In the last three years, after a very long break, new airlines were established; the government considers the development of interregional links as one of its strategic objectives; and the level of inbound tourism and the number of connecting passengers flying from China to Europe has increased significantly. All of this bodes well for overcoming today’s difficulties,” points out Boris Rybak, chief executive of event co-organiser Infomost Consulting.

The Wings of Russia Awards scheme – named after Evgeny Chibirev – was co-founded in 1997 by Air Transport Observer magazine (Russian Aviation Insider’s sister publication), Russia’s Air Transport Operators Association and Infomost Consulting. It was created to attract public attention to the achievements of Russian airlines, thereby encouraging development of the professional community, empowering the image of Russian civil aviation in the global arena and nurturing a favourable investment climate for the industry.

The awards sponsor is AlphaStrakhovanie. Sponsors of the nominations are Lufthansa Technik, Rolls-Royce, Embraer and Transport Clearing House. The annual awards scheme is supported by Sealine. The official communications agency is Citigate Dewe Rogerson.