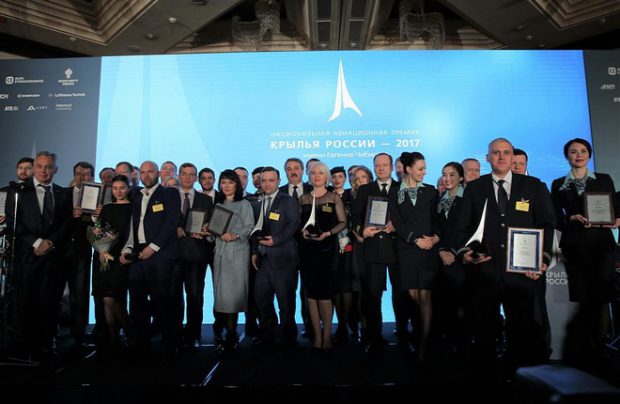 The latest Wings of Russia Air Transport Awards, the nation’s most prestigious recognition of excellence among Russian airlines and airports, were presented on April 10, 2018, at a gala dinner at the Renaissance Monarch Hotel, Moscow.

In what was the 21st annual ceremony of the popular award, this year saw 12 categories singled out for special recognition, as some 100 applicants competed for the chance to become winners.

Nominees came from the entire range of airlines and airports operating in Russian air transport, taking into account their size and specialisation.

The winners were selected after a secret ballot by a panel of experts made up of handpicked representatives from public organisations, the media, the aviation business, as well as independent experts.

This year, the Aeroflot group of airlines triumphed in five main categories, with Aeroflot, the group’s flagship carrier, recognised as the leader in three. The carrier was once again named Airline of the Year in the International Scheduled Passenger Carrier category, and won the Domestic Passenger Carrier, Group 1 category (with domestic traffic of more than four million passengers) for the first time in several years.

The airline continued to dominate in the prestigious Russian Airline of the Year, People’s Choice Prize nomination, an award which is based on the results of an online passenger customer survey.

Also noted was the continued growth of Aeroflot’s subsidiaries. Low-cost carrier Pobeda won the title of Airline of the Year in the Domestic Passenger Carrier, Group 2 category (with domestic traffic between 0.7 to four million passengers). Aurora, Aeroflot group’s carrier in the Russian Far East region, once again won the Air Transportation on Regional Routes category.

In other categories, the best Business Aviation operator was RusJet, whilst fast-growing and service-enhanced Moscow’s Sheremetyevo International Airport triumphed in the Airport of the Year category.

The Airports of Regions management company won the Project of the Year award for its new venture at Rostov-on-Don’s Platov International Airport, which is widely regarded as the first post-Soviet era Russian airport of its size to be built from scratch.

Emirates won the accolade for International Airline of the Year, People’s Choice Prize nomination, an award based solely on the results of an online passenger survey.

“Since year 2000 – and as passenger traffic in Russia has substantially grown – these awards are becoming even more significant so that now they are the most prestigious Russian awards for both domestic and foreign airlines,” stresses Alexander Neradko, head of the country’s Federal Air Transport Agency. “I am confident that as Russia’s air transport industry expands and develops further, the Wings of Russia Awards will gain further in popularity,” he adds.

The Wings of Russia Award was co-founded in 1997 by Air Transport Observer magazine (Russian Aviation Insider’s sister publication), Russia’s Air Transport Operators Association and Infomost Consulting. It was created to attract public attention to the achievements of Russian airlines, thereby encouraging development of the professional community, empowering the image of Russian civil aviation in the global arena and creating a favourable investment climate for the industry.

The awards are supported and sponsored by Rosneft-Aero, AlphaStrakhovanie, Lufthansa Technik, Embraer and Transport Clearing House. Bombardier is a welcome champagne sponsor. The official communications agency is Citigate Dewe Rogerson.