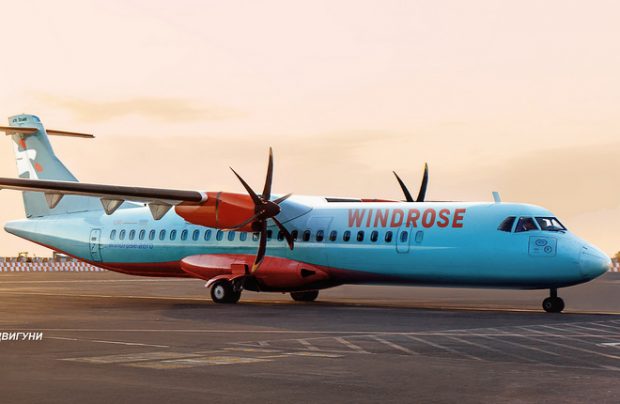 Ukraine’s Windrose Airlines, best known for its role as an international leisure charter carrier, has announced plans to diversify its business by launching domestic scheduled services this year. It has also shed more light onto its fleet strategy plan to completely replace its Embraer 145 regional jets with ATR 72 turboprops by the end of 2021.

For the last 15 years or so, Windrose has been active primarily as a leisure charter carrier operating in the Ukrainian air travel market but now, banking on an improving economic environment in the country, the airline is this year launching scheduled domestic services, initially linking capital Kyiv’s Boryspil airport with Lviv, Odesa, Nikolayev, Dnipro and Kharkiv. To support this business expansion, the airline is adding eight 70-seat ATR 72-600s to its fleet. Eventually the turboprops will completely replace its five 48-seat Embraer 145s on the international routes as well, Windrose’s general director Volodymyr Kamenchuk, revealed to the avianews.com outlet.

Of the eight ATR 72-600s the airline has contracted for lease, five will be delivered within 2020, with the first two in March, followed by two in April and May and a further one in October. The remaining three will join the fleet next year. The Embraer 145 jets will remain in the fleet until the end of the 2021 summer season performing flights from Ukrainian capital to Bucharest, Ljubljana, Sophia and Zagreb. Once the Embraer jets are phased out, all international services will instead be served by the ATR turboprops. The E-145s, on average 19 years old, were inherited from fellow carrier Dniproavia in 2017 after it went out of business.

“We considered several regional aircraft types: the Embraer 170/175, the Bombardier CRJ 700/900, the Bombardier Dash 8 Q400, and the ATR 72-600. Taking into account a combination of our typical flight range of between 350 and 650 km, the surface condition at our destination airfields, fuel costs and other factors, we finally opted for the ATR-72-600,” Kamenchuk explained.

Once the daily domestic services from Kyiv to Ukraine’s five larger cities are up and running, Windrose plans to expand the domestic network further with daily flights to the smaller Krivoy Rog and Ivano-Frankivsk. Additional expansion of the regional programme is scheduled for the 2020/2021 winter season, with routes from Ivano-Frankivsk to Dnipro, Kharkiv and Odesa. Within the same timeframe the airline may also expand its international offerings, said Kamenchuk.

Established in 2003, Windrose Airlines currently operates a fleet of five Airbus A321s and an A320 on charter flights, and uses five Embraer 145s for its scheduled and international services. Windrose is one of the two Ukrainian carriers which has been registered as an IOSA (IATA Operational Safety Audit) certified airline.