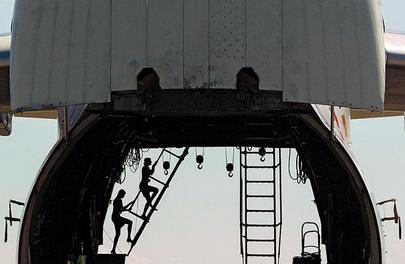 An-124 has been left without the OEM's support (Photo by Leonid Faerberg / transport-photo.com)

The Russian-Ukrainian conflict has had a negative impact on continued airworthiness of the world’s largest serial transport aircraft, the Antonov An-124 Ruslan. Military aircraft operated under Russia’s Defense Ministry have been taken care of by a governmental decree, which made the Ilyushin Aviation Complex responsible for their maintenance. However, the type’s largest commercial operator, Volga-Dnepr Airlines, has encountered serious difficulties.

At the end of last year, Russian charter cargo carrier Volga-Dnepr (part of Volga-Dnepr Group), with its fleet of ten An-124s and five Il-76TD-90VDs, carried 32,700 ton of cargo, making it the fifth largest cargo carrier in the world. The An-24-100, which is used to transport extra-heavy and oversized cargo, flew approximately 15,000 hours in 2015.

Last fall, Volga-Dnepr and Sberbank Leasing signed a financial leasing agreement for two An-124-100s previously operated by the now-defunct Polet Airlines. Commenting on the occasion, Volga-Dnepr’s vice-president Denis Gliznutsa expressed confidence that the fleet expansion would enable the carrier to react more efficiently to customer requests. “Operating Ruslans requires knowledge, experience and developed infrastructure, including maintenance facilities. Volga-Dnepr has been operating the type for 25 years, and meets all the requirements,” he said.

In late Spetember, both aircraft were ferried to Volga-Dnepr’s base in Ulyanovsk—by then, their airworthiness certificates had expired. According to information released by Sberbank Leasing, the two Ruslans are expected to enter service with Volga-Dnepr in 2016, provided they undergo modernization in compliance with OEM airworthiness programs. This is nothing unusual, except the fact that Ruslan’s OEM is Ukrainian state-owned enterprise Antonov.

Volga-Dnepr’s technical director, former An-124 chief designer Victor Tolmachov, assured Russian Aviation Insider that the airworthiness status of at least one of the two aircraft will be restored in the first half of this year. “Technically, our MRO subsidiary Volga-Dnepr Technics are fully capable and entitled to restore both Ruslans to the condition required to extend their airworthiness certificates. In the second half of 2016, we will start filing documentation required by the Federal Air Transport Agency. According to the current regulations, we should submit some of the materials approved by Antonov. However, our current relationships with the Ukrainian enterprise demonstrate that the OEM services with either be significantly delayed, or will become altogether impossible,” the director said.

Volga-Dnepr Technics is approved to perform periodic maintenance forms up to A-check (500 hours or 6 months). For heavier forms, the operator will have to resort to the services of Antonov, the Ulyanovsk-based Aviastar-SP (which assembled all of Volga-Dnepr’s aircraft), and other Russian institutions.

A few years ago, Antonov, being the type certificate holder, extended the service life of each of Volga-Dnepr’s aircraft for another 4,000 hours. “Two of our Ruslans have already gone beyond that limit and require further extension. However, Antonov is failing in its obligations. According to the regulations, the OEM should send its specialists to our base for inspections, but this is not happening. I don’t know what we should undertake. All of our An-124-100s are due for Antonov’s inspections before 2018. We have not received any formal letters stating that our co-operation with the OEM is suspended. But in our daily routine we feel that the Ukrainian enterprise has de facto stopped working. Which means, that all of the commercially operated An-124s have been left without OEM support, although the enterprise has the authority of supporting all Antonov aircraft throughout their lifecycles.”

Russian authorities have not yet provided a solution to the problem, although the carrier has filed numerous requests and proposals. The issue needs to be resolved within 2016 in order to keep Ruslans flying, Tolmachov emphasized.

What the future holds

According to Volga-Dnepr’s data, the total number of components that make up the An-124-100 is about 2,600, out of which 92% of the parts are produced in Russia, 4% in Ukraine, and the rest, elsewhere. So far, the operator manages to negotiate deliveries and repairs of components with all providers. Ukrainian companies still produce and repair important units for Ruslan, including engines. Tolmachov does not envision further increase of the share of Russian-produced components under current economic conditions. “Even before the Russian-Ukrainian relationship deteriorated, there have been talks of re-launching Ruslan production in Russia, or even creating a new aircraft that would replace the Ruslan. There still are, but they remain nothing more than just talks.”

The commercial version of the An-124 has been in service for over two decades; the Interstate Aviation Committee awarded the aircraft its type certificate in 1992. Over 20 major upgrades that require additional certification and over 350 minor ones have been introduced during this period, thanks to the joint efforts of Antonov and Volga-Dnepr. Four supplementary type certificates have been received within the last decade, the most notable of which are for Honeywell’s inertial system and weather radars, and for the aircraft’s life extension to 50,000 flight hours.

All of the modifications have been carried out on all ten of Volga-Dnepr’s Ruslans. Up to now, the aircraft have flown approximately 25,000 hours, half of their certified life.

“The lifecycle of the An-124-100 fleet in operation today is limited to 40-50 years,” says Tolmachov. “They will keep flying until 2025-2030, provided that they are continuously upgraded. ICAO’s requirements in terms of equipment for radio communication, surveillance, ecology, and flight safety are getting ever more stringent; this is the norm. All of the aircraft are becoming more sophisticated. Just look at Boeing 747s operated by our sister company, AirBridgeCargo, which has gone all the way from the 747-100 to 747-800. For the last twenty years, we have been upgrading the civil version of the An-124 jointly with Antonov, and today the aircraft is almost 100% compliant with international standards. But we don’t know about tomorrow.”