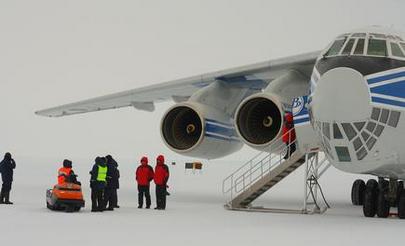 Russian outsize freight specialist Volga-Dnepr is planning to start operating flights to the Antarctic. For this purpose, the operator has joined efforts with OEM Ilyushin and State Scientific Research Institute of Civil Aviation in testing the Il-76 (Il-76TD-90VD) cargo jet landing on an ice airfield.

One of Volga-Dnepr’s aircraft has recently become the first Il-76 to land in the Antarctic, at the airfield of the Russian research station Novolazarevskaya. After landing successfully, the airliner performed several high-speed taxi tests to make sure the proposed method of using the thrust reversers was appropriate for such type of airports. The tests are expected to result in amendments to the Il-76 flight crew operating manual, allowing the type to operate from snow-covered ice strips.

Georgy Sokolov, sales director at the carrier’s British division Volga-Dnepr UK, says the aicraft will then be able to fly to the Arctic and the Antarctic.

Volga-Dnepr has already started joint work on a major project with South African company Antarctic Logistics Centre International (ALCI), which runs a supply line between Cape Town and Novolazarevskaya. According to open sources, ALCI is using for this purpose at least one Il-76TD, operated by Belarusian carrier Transaviaexport.

Il-76TDs have been flying to the Antarctic since the mid-1980s. The baseline design is powered by four Soloviev D-30KP-2 turbofan engines producing 12 t of thrust each, whereas the Il-76TD-90VD version has more powerful Aviadvigatel PS-90A-76 powerplants with 14.5 t of thrust.