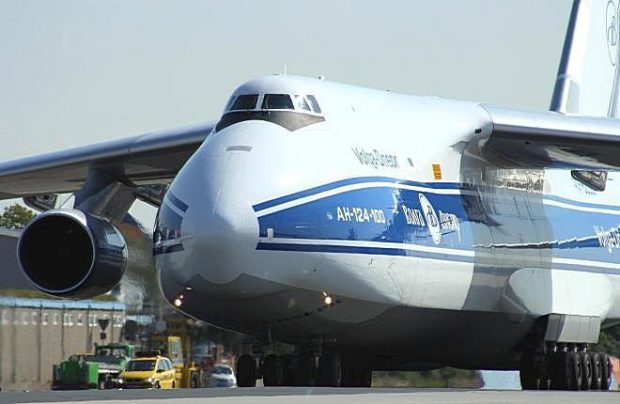 Volga-Dnepr has cut down its An-124 fleet from 12 to eight aircraft and two more will be put in storage, which means it will lose its place as the type’s largest operator to rival Antonov Airlines, which currently flies seven An-124s (Volga-Dnepr)

Challenging global airfreight market conditions have forced Russian outsize cargo specialist Volga-Dnepr to make unplanned staff and capacity cuts. A significant downturn in demand has triggered a staff reduction programme and the mothballing of part of the carrier’s An-124 fleet that is currently not required by the market.

The world’s largest operator of the Antonov An-124-100 says the decision will prepare the airline for the return of market demand and its anticipated subsequent volume growth bounce. It is cutting down its fleet of the unique super heavy freighters “to withstand a significant downturn of demand in the air cargo market,” says a statement. The carrier’s fleet of five smaller Ilyushin IL-76 freighters will remain intact.

The parent airline was affected the most among all carriers in the group. It’s cargo turnover dropped by almost by 40 per cent in the January-August 2019 period.

In another move, Volga-Dnepr’s staff reduction programme is focused on its main base at Ulyanovsk. According to a source in the Russian airline industry, it concerns only 100 out of 1,500 of the airline’s employees and does not affect other carriers in the Volga-Dnepr Group. Apart from the parent airline, the group includes scheduled operator AirBridgeCargo, which is Russia’s largest cargo carrier, and feeder and express shipments airline Atran. Alexey Isaikin, the owner of the group, also operates CargoLogicAir, a UK-based carrier and has recently launched CargoLogic Germany in Leipzig.

The news comes as the airline reports that the Russian Federal Air Transport Agency has granted an airworthiness certificate for its first An-124-100 to transport 150 tonnes of cargo per flight – 30 tonnes more than in standard configuration. To achieve this, the airline has had to reinforce the cargo floor and install strengthened tyres to handle the increased weight, the airline’s representative explained to Russian Aviation Insider.

Its competitor, Antonov Airlines, the Ukrainian subsidiary of the type’s designer, has already modernised two of its seven freighters into the An-124-100M-150 format to carry 150-tonne payloads and Volga-Dnepr is planning to modify at least three more of its An-124-100s.

Another fleet improvement calls for the installation of an automatic dependent surveillance-broadcast (ADS-B out) – a requirement that will become mandatory in the USA and Europe during 2020. Volga-Dnepr reports it has already successfully completed the certification of its flight tests programme on the An-124-100 equipped with ADS-B out. The flight tests took place at the airline’s base at Leipzig, Germany and apparently involved the aircraft with side number RA-82078. Volga-Dnepr said the trials were held in compliance with Russian regulations and procedures and were attended by the certification organisations accredited by Russian authorities.

Although these improvements will enable Volga-Dnepr to operate its An-124s more efficiently, nevertheless it is mothballing part of the type’s fleet, citing “no demand by the market”. The Russian carrier is the pioneer of successfully bringing these military transports into the oversize cargo market in the 1990s.

The reduction of its An-124 capacity is partly a natural process, as the production of these giant aircraft was suspended in 2004. Hopes for a revival faded 10 years ago with the deterioration of relations between Ukraine, where the aircraft designer Antonov is located and Russia, which possesses most of the production facilities for the type.

Volga-Dnepr has now certified all the improvements for the An-124 without the need for the further participation of Antonov. In any case, the latter has recently banned the operation of Russian An-124s without its approval. The airline’s representative said this ban concerns only flights in Ukraine’s airspace that Volga-Dnepr is currently avoiding.

In the last two years, the Russian carrier has cut down its An-124 fleet from 12 to eight aircraft and one or two more will now be put in storage, said the airline. This means it will lose its place as the type’s largest operator to Antonov, which currently flies seven An-124s.

A source in the Russian aviation industry has explained that the biggest blow for the cargo carrier is the withdrawal from the NATO SALIS airlift programme at the end of 2018. He also revealed that Brexit and the US-China trade war are among other reasons for the market downturn. Nevertheless, the airline said it was preparing “for the return of market demand and its subsequent growth”. The traditional peaks of demand are expected during the western and Chinese new year holidays.

Two other airlines of the Volga-Dnepr group are currently feeling a little better. The slump of AirBridgeCargo, the largest carrier of the group, was around seven per cent and Atran has alternatively increased its turnover by more than 42 per cent, for the first time surpassing its parent carrier. The group’s total cargo volumes fell by about eight per cent to 3.5 million tonnes.

AirBridgeCargo currently operates nine Boeing 747-400Fs and 13 Boeing 747-8Fs, while Atran has this year increased its fleet up to six converted Boeing 737s.