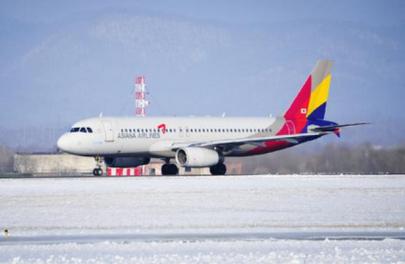 The airline opened the route between South Korea’s capital and one of Russia’s largest Far Eastern cities three years ago. Asiana president said at the opening ceremony that the company considered the destination to be promising, and was expecting traffic to grow fast due to increasing business activity in the region, and also thanks to the recently launched Open Skies policy.

From the airport’s perspective

The Vladivostok – Seoul route leads in terms of traffic among Knevichi’s international city pairs. Apart from Asiana, the route is serviced by Korean Air, Aeroflot’s subsidiary Aurora, and S7 Airlines.

“The Open Skies policy enabled the Vladivostok airport to attract new carriers and intensify competition on the Russia – Korea route,” says the airport’s spokesman. “As a result, the air fares became more affordable to our passengers, who got a choice of carriers and connection flights. The liberalization of air services between Vladivostok and Korea led to a doubling of frequencies, and passenger numbers grew exponentially in 2012-13.”

The airport explains Asiana’s exit by a significant decrease in demand for international air travel in the region throughout 2014 and 2015, “for obvious reasons.”

“Regretfully, of the four carriers operating the route Asiana Airlines, being the newest player, was the most sensitive to the negative changes in the economic factors, which affected international traffic at all Russian airports,” the spokesman notes.

To date, the Knevichi operator has reported the operating results only for the first nine months of 2015. In January through September, the airport served 1.315 million passengers, or 4.1% down year-on-year. International traffic accounted for 26% of the figure (down 10.8% year-on-year). Domestic traffic fell 1.6% to 975,000 passengers.

Knevichi proposed introducing the Open Skies regime in 2011. An unprecedented project at the time, the practise has since been replicated at Kaliningrad and Sochi. The Knevichi project was expected to secure sufficient traffic for the airport’s new terminal, built for the 2012 APEC summit, which can handle 1,360 passengers per hour, or 3.5 million annually. The terminal was optimized to serve international and domestic passengers at a 30/70 ratio.

Knevichi served 1.792 million passengers in 2014, meaning that its terminal operated at 51% capacity; the ratio of international and domestic passengers was roughly as planned at 28/72.

Vladivistok International Airport forecasts that traffic at Knevichi will double in the next five years to 3.5 million passengers, provided that a number of projects are fully implemented. For one, the Russian federal authorities are expected to streamline their efforts aimed at integrating the region into the Asia-Pacific culturally, economically, and in terms of transport infrastructure. Also, incoming tourism from densely populated neighboring countries needs to be stimulated through construction of tourist attractions; a free-port project is expected to attract business to the region, and so on.

In 2014, Knevichi came 17th in the ranking of Russian airports by traffic, down two places from its 2013 standing.