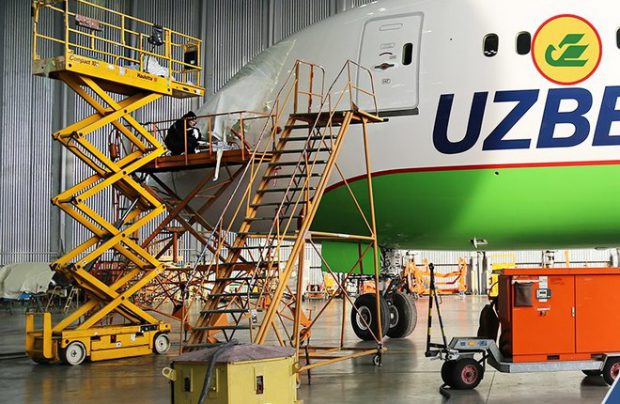 Uzbekistan Airways Technics (UAT), the independently run maintenance, repair and overhaul (MRO) arm of Uzbekistan’s state-owned flag carrier, has successfully completed its first C-check on a Boeing 737. The B737CL/NG variant was added to the organisation’s EASA Part-145 certification in October last year and is the first of the type that is not operated by the service provider’s Uzbekistan Airways parent. Adding the B737 will help promote UAT as a stand-alone MRO service provider, in line with the expansion strategy adopted in 2018 to formally separate it from its parent airline.

The first Boeing 737 to undergo heavy maintenance at UAT’s Tashkent base is a 1992-produced B737-400 that is operated by Lithuanian ACMI (aircraft, crew, maintenance and insurance) carrier GetJet, the first customer from the many B737 operators in the region.

In addition to the B737, Uzbekistan Airways Technics’ capability list includes the Boeing 757/767/787 range and the Аirbus A319/320/321 family of aircraft, all of which are approved by the aviation authorities of Uzbekistan, Kazakhstan, Tajikistan, Europe and Bermuda.