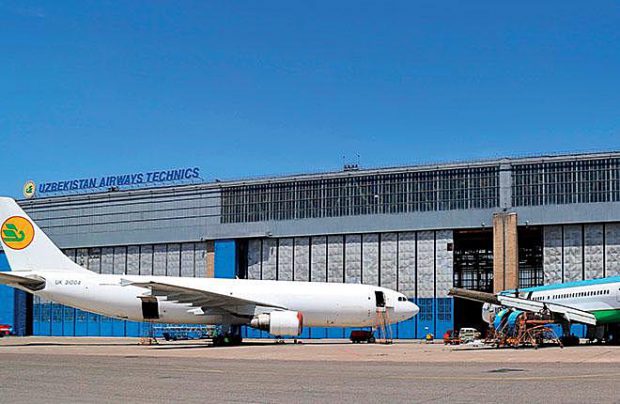 At its Tashkent International Airport headquarters, UAT is capable of performing line and base maintenance on Boeing 757/767 and Airbus А320 family aircraft (UAT)

Uzbekistan Airways Technics (UAT), the structural MRO (maintenance, repair and overhaul) division of Uzbekistan’s national carrier, is gearing up for a reform, which could see it become an independent entity. UAT is hopeful that fundamental changes and the addition of new capabilities will help it win more third-party customers, especially from Asia.

In the first stage of the separation, scheduled for next year, parent carrier Uzbekistan Airways is planning to loosen its control over its maintenance division’s financial performance. “Whereas until now our headquarters has been in control of all of our income and expenditures, now it is letting us navigate by ourselves,” Oleg Volokitin, deputy general manager of UAT’s western jet maintenance centre has revealed to ATO.ru, Russian Aviation Insider’s sister publication. “The control will stay, but not the [financial] oversight,” he continues. “So this will afford us more flexibility in decision making, because we won’t have to coordinate our expenditures so rigidly.”

At its Tashkent International Airport base, UAT performs line and base maintenance on Boeing 757/767 and Airbus А320 family aircraft. For heavy checks it uses the 17,300-sq m hangar, which can accommodate three wide-body aircraft simultaneously. Volokitin also claims that the company’s personnel have now been trained to handle the entire spectrum of maintenance and engineering procedures for the Boeing 787. The company has temporarily reconfigured its big hangar, which is able to accommodate Boeing 747-sized aircraft, for the smaller Dreamliner, but plans to build a dedicated facility for two 787s within the next three years with financial support from the state budget. All the required documentation for that project is already in place, Volokitin insists, and at this point the company is also working on the creation of a spare parts warehouse at the new facility.

UAT has been expanding its infrastructure primarily for the maintenance needs of its parent airline Uzbekistan Airways, which operates a fleet of some 30 airliners, including three Boeing 787-8s. Three more Dreamliners are due to be delivered in late 2019 and 2020. In the meantime, the maintenance station is also in the process of obtaining new approval for the Boeing 737, allowing it to add both Classic and NG versions to its menu, making it the first type not operated by its parent airline. Its first 737 customer has a scheduled shop visit in the first quarter of 2019.

UAT is hopeful that these reforms and the addition of new capabilities will help to grow its share of the third-party market. Previously, a couple of Russian airlines have sent their aircraft to Tashkent for maintenance, including Ural Airlines and the now defunct VIM Airlines, which left the market in October 2017. But today, Volokitin reveals, UAT is primarily targeting the Asian market. Among its regular customers are Kazakhstan’s SCAT Airlines and Tajikistan’s Tajik Air and negotiations are going on with Turkmenistan Airlines. Although UAT is still making an effort to attract airlines from Russia, such as Azur Air, for example, Russia’s own maintenance market is developed enough to “rid local operators of the necessity to ferry their aircraft to Uzbekistan,” says Volokitin.

Last year the Uzbek maintenance company completed 20 C-checks and some 150 A-checks for its parent airline. In addition, it won contracts for maintenance services on five aircraft operated by third-party carriers. But this year the number of outsourced contracts is expected to reach 12.

Local regulations have favoured the development of aircraft maintenance services in Uzbekistan, Volokitin admits, including some amendments recently made to the Customs code. “Whereas three years ago the Customs clearance of an aircraft arriving for a shop visit could last between two and three days, today it takes 15 minutes,” he says.