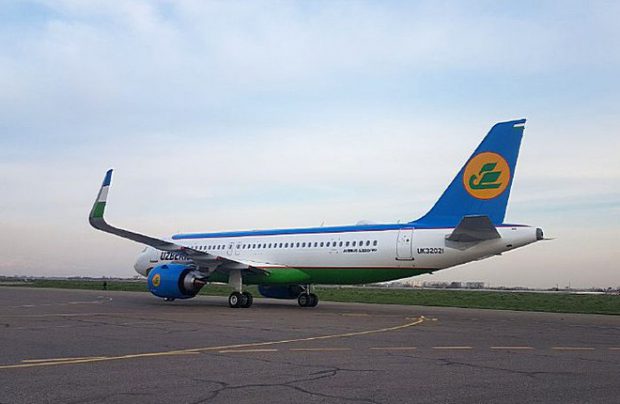 Following the plan to upgrade its mid-haul fleet, national carrier Uzbekistan Airways has started to accept deliveries of the newest Airbus A320neo aircraft. The Central Asian country’s only airline has taken delivery of its first Airbus A320neo aircraft, albeit three months later than originally planned, in a March 11 ceremony held at the airline’s home base at Tashkent International Airport.

In doing so, the Uzbeki carrier has become the third A320neo operator in the CIS, after Russia’s S7 Airlines (which operates 10 A320neos and three A321neos) and Air Astana of Kazakhstan (which has one A320neo and three A321neos in operation). Uzbekistan Airways’ second delivery is expected in April. Both aircraft are on operating lease from BOC Aviation.

Powered by CFM International’s LEAP-1A engines, the first aircraft (tail number UK32021) offers a two-class layout and is configured to carry 150 passengers, with 12 in business class and 138 in economy. The A320neo’s extended flight range, which can exceed 5,000 km, allows it to be operated on routes throughout the central European region, Uzbekistan Airways points out.

The aircraft is equipped with Panasonic’s X-Series IFEC inflight entertainment and connectivity system, which provides passengers with audio and video content via personal HD touch screens, as well as wireless high-speed Internet access. A similar system is installed on the Boeing 787-8 in the carrier’s fleet, but unlike the A320neo, where IFEC is installed on the production line, the system will be retrofitted on the B-787 by Uzbekistan Airways Technics, the airline’s maintenance, repair and overhaul (MRO) arm.

Uzbekistan Airways says that the second A320neo is expected to join the operator’s fleet at the start of next month, in time for the 2019 summer season. The carrier had originally planned to receive both aircraft in December last year. This year the airline is also planning to take two more B-787s.

As of the end of January, there were 25 aircraft in commercial operation at the airline: nine Airbus A320s, five Boeing 757s, eight Boeing 767s (two of which are freighters) and three Boeing 787 Dreamliners.