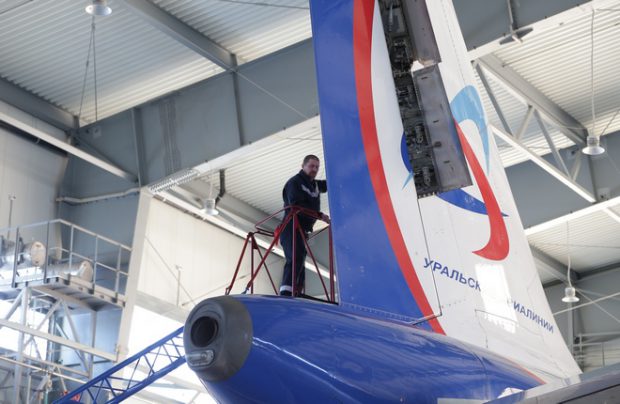 As part of the program to minimize the use of third-party contractors’ services during maintenance and repair of its fleet, Ural Airlines, Russia’s fifth largest carrier, has opened another line maintenance station. The new facility, as well as its own warehouse, has been set up at Pulkovo Airport (LED, St. Petersburg), where the planned volume of work by the end of the year will amount to almost 9,000 man-hours.

Ural Airlines (U6) operates an impressive flight program at the airport of the Russia’s Northern Capital and is usually one of the five leaders among Russian airlines in terms of traffic at Pulkovo.

According to the Yekaterinburg-based carrier, the expansion of the service station network will allow it not only to maintain the punctuality of flights, adhering to the planned schedule, but also “completely exclude the participation of subcontractors, which cannot always maintain a high rate and the quality of work to ensure a high level of flight safety”.

In August last year, in the midst of the pandemic crisis, the airline opened a line maintenance station and a warehouse at Zhukovsky Airport (ZIA). The current volume of work performed at the airport near Moscow is 3,100 man-hours. The planned volume of work by the end of this year is 3,800 man-hours.

Also, since August 2020 (when the gradual restoration of the air traffic began), a maintenance station in Moscow Domodedovo (DME), one of the carrier’s base airports, completed work in the amount of almost 51,000 man-hours and announced a complete rejection of the participation of subcontractors. Now the entire scope of maintenance work is performed here only by the airline specialists.