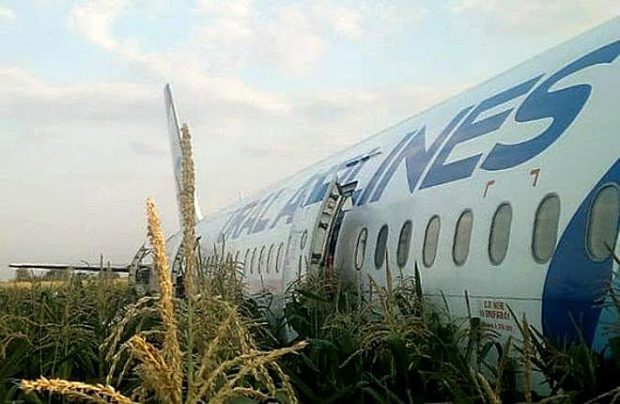 An Airbus A321-211 aircraft, operated by Russia’s Ural Airlines (U6), made a safe belly landing on a cornfield one kilometre out of Zhukovsky airport (ZIA) near Moscow this morning. 10 people were injured among the 226 passengers and the team of seven crew members on board.

The aircraft, which was performing a scheduled U6178 flight from Zhukovsky to Simferopol, Crimea, suffered multiple bird strikes, which affected both engines during take-off.

The pilots decided to land immediately and touched down in a cornfield just one kilometre from the end of the runway. Both engines had been shut down before the landing and the jet’s landing gear was retracted. The local fire brigade reported no blaze, just smoke from the right engine.

No fuel leak has been reported and all passengers were safely transported to the Zhukovsky airport terminal.

The chief pilot was 41-years old Damir Yusupov, with a flight log of more than 3,000 flight hours, according to the carrier. The second in commend was 23-years-old Georgy Murzin, with more than 600 hours.

The aircraft, a 15-year vintage CFM56-5B3/P-powered Airbus A321-211, sporting registration VQ-BOZ, is a part of the Yekaterinburg-based airline’s all-Airbus fleet since 2011.

With a current in-service fleet of 45 aircraft from the Airbus A320 family – including five A319s, 24 A320s and 16 A321s – the Russian operator served some 5.3 million passengers in the first seven months of this year, a seven per cent year-on-year improvement. The airline’s flight geography now includes more than 200 destinations.