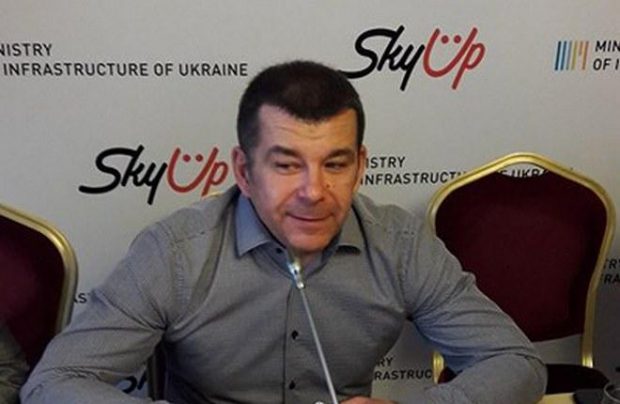 The announcement was made by the airline's co-founder Yuri Alba (ATO.ru)

A new Ukrainian start-up airline, known as SkyUp Airlines, was presented at a news conference in Kyiv on December 14. The carrier, which was registered in June 2017, is currently finalizing AOC issuance formalities and expects to launch operations in April 2018.

Plans for the first year include launching an international charter program to leisure destinations and scheduled flights, both within the country and abroad, with Boeing 737-800s.

The airline was founded by Yuri and Tatyana Alba, the owners of one of the country’s major tour operators Join UP!. Evgeny Khainatsky will lead the project as general director. He previously worked for two Ukrainian airlines, AeroSvit and Air Onix, both of which have since ceased operations.

The airline will start with charter flights. In 2018 it plans to offer services from Kyiv, Kharkiv, Lviv, Odesa, and other Ukrainian airports to a total of 16 international destinations: Antalya, Bodrum, and Dalaman in Turkey; Hurghada and Sharm El Sheikh in Egypt; Tivat in Montenegro; Alicante, Barcelona, Palma de Mallorca, and Tenerife in Spain; Albania’s capital city Tirana; and also Rimini, Burgas, Varna, Larnaca, and Dubai.

Domestic flights will be launched in late May with routes to Odesa from Kyiv, Kharkiv, and Lviv. There will also be scheduled international flights in 2018: from Kyiv to Barcelona, Dubai, and Larnaca. The carrier will embrace the low-cost business model for its scheduled operations, with checked-in baggage and other ancillary services offered at an extra price. The minimum one-way domestic fare will start at 499 hryvnias ($18).