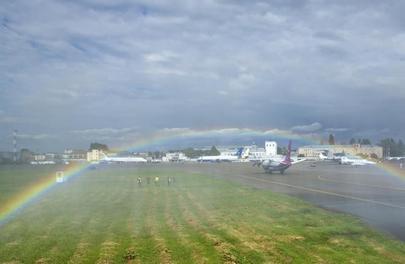 From January through May of this year, air passenger traffic in Ukraine increased by 15.9%. According to the results of the first five months of 2016, the number of air traffic passengers carried reached 2.436 million, according to information released by the State Aviation Administration of Ukraine.

On international flights, Ukrainian air carriers served 2.155 million passengers, 14.2% more passengers than in the same period last year. Data for domestic flights has not yet been released, as is the case for individual air carriers. However, it is clear that in Q1 of this year a group of airlines managed to markedly increase the number of passengers served.
Ukraine International Airlines served an extra 32.2%, while Yan Air 12.9. Azur Air Ukraine and UM Air increased their numbers by 25.15 and 22.2%, respectively.

In particular, Kyiv’s two airports managed to increase their passenger throughput. The number of passengers served at Boryspil, the larger of Kyiv’s two airports, increased by 12.8% to 2.82 million passengers, against last year’s figure of 2.5 million. This is partially a result of Boryspil’s attracting transit passengers.

Kyiv’s smaller airport, Zhulyany, has released statistics only for March, April and May of this year. In March, the airport served 57.3 thousand passengers, then it served 62.6 thousand in April, and 81.7 thousand in May.

In Q1 2016, the total amount of passengers aboard Ukrainian airlines increased 13.4%, and airports increased by 9%. Boryspil, as a result, served 70% of all passenger traffic in the entire country.