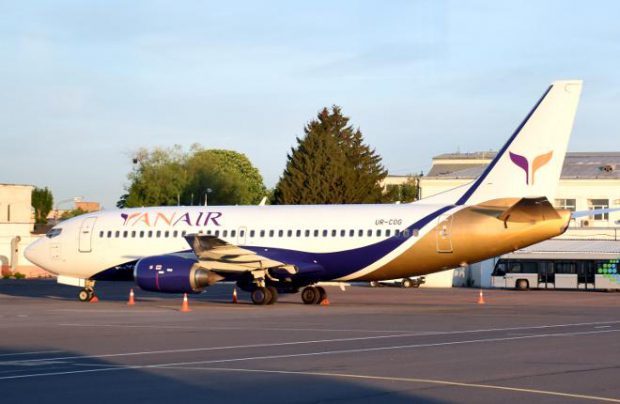 Two of the carrier's narrowbody jets will be replaced (Vasyatka1 / Wikimedia)

The carrier currently operates two examples of the Boeing 737-300, which is the baseline version of the Boeing 737CL family, and also a single example of the 737-400 stretch. The plan is to replace both -300s with one 737-400 (which has already been registered with YanAir) and one shorter-fuselage 737-500.

The airline also has two Airbus A320 family aircraft in its fleet: one А320 (currently undergoing maintenance) and one А321, which it being wet-leased to Eritrean Airlines.

The airline is accommodating its fleet to a point-to-point services strategy. YanAir does not rule out switching to a hub model within three to five years. With Ukrainian citizens having recently been permitted to travel to the EU without visas, European countries appear to be the most promising potential destinations for the airline.

YanAir’s short-term plans include expanding the number of routes from Kyiv and Odesa within the 2018 summer schedule. Agafonov mentioned Cyprus, Italy, and Romania among the attractive countires, but did not specify further. The airline might start flying to second-tier European airports, such as Germany’s Frankfurt-Hahn.

The carrier is planning to set up another base at Zhytomyr airport, 130 km west of Kyiv, in addition to its current home port of Zulyany. YanAir already operates out of Zhytomyr, and has a maintenance base there. Runway reconstruction works are currently underway at that airport; once these are complete, the airline will start operating from there.

Lviv is another airport YanAir has on its short-term plans, because of that airport’s beneficial open-skies regime. To pursue this goal, however, the airline will need to add at least two more aircraft to its fleet.

The operator launched a business aviation division in January this year. The YanAir Connect service offers charter flights with a single Cessna Citation CJ1. The airline says it will assess the financial return on the program in late 2017, and will decide on whether it should expand its business jet fleet.

As of early 2017, YanAir’s fleet also included several SAAB 340 regional turboprops, which performed ad-hoc charter flights. The airline admitted, however, that these airliners were commercially unviable. Currently, Ukraine’s State Aviation Service does not list the Saabs as part of the operator’s fleet.