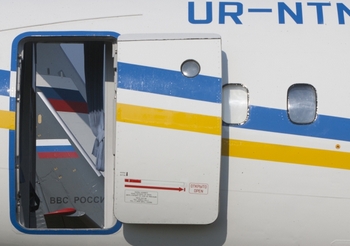 Aeroflot has received a formal notice from Ukraine’s State Aviation Agency to the effect that this Russian airline will be banned from flying to Ukraine starting on October 25, Aeroflot’s spokesperson told Russian Aviation Insider.

Similar notices have been sent to several other Russian airlines, including Transaero, after Ukrainian President Petro Poroshenko signed a decree on September 16 enforcing the relevant decision of the country’s National Security and Defense Council.

Information about the sanctions against the Russian airlines was made public last week, but no terms were specified. Apart from flights to Ukrainian airports, the restrictions apply to transit flights “carring military or dual-use items, or Russian troops”.

The black list includes 25 Russian carriers, but omits UTair Aviation, which has a subsidiary airline in Ukraine.

Commenting on the sanctions in an interview with the government-owned TV channel Rossiya 1, Russian Transport Minister Maxim Sokolov said that Russia would have to take reciprocal measures should it receive an official notification of the ban from Ukraine. Seeing as the Ukrainian party emphasized the embargo for Aeroflot and Transaero, Sokolov promised to react with sanctions against two Ukrainian carriers. According to Interfax newswire, Russian Prime Minister Dmitry Medvedev instructed the Transport Ministry earier today to introduce restrictive measures against Ukrainian carriers.