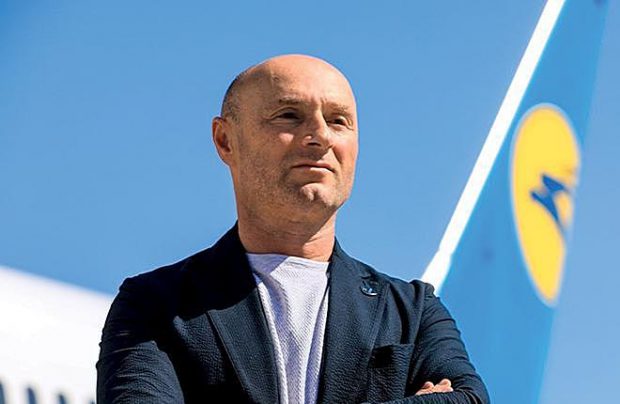 The financial status of Ukraine International Airlines (UIA), Ukraine’s largest carrier, remains turbulent. Unable to climb out of the red, the airline has been forced to cut a number of services and re-model its route network, the country’s newly appointed president Evgeny Dykhne has revealed.

Furthermore, in an interview with Ukrainian business portal Mind, UIA’s co-owner and head of the supervisory board Aron Maiberg, also admitted that 2019 will be the third loss-bearing year in a row for the privately-run flag carrier. According to Maiberg, the loss in 2017 was “insignificant” but, in 2018, net profitability slumped by nine per cent.

Several factors are damaging UIA’s business model, with the weak Ukrainian economy the main culprit. “The airline cannot reach its full potential here (in Ukraine], because of the country’s passengers’ weak purchasing power,” Maiberg explains. “The share of domestic tickets should be between 60 and 65 per cent, because it’s the home market where a local airline [usually] has many benefits its competitors lack. But we don’t have that advantage,” he stresses. UIA’s share of local sales does not even exceed 35 per cent.

UIA is taking firm measures to mitigate further losses and is currently in delicate negotiations with Ukraine’s new government. “We are saying that we can no longer subsidise our routes. The airline has exhausted its own resources. If we don’t get reimbursement, the only way to make our status more healthy is by suspending loss-making routes,” Maiberg concludes, adding that all Ukrainian airlines deserve compensation payments for having to navigate around Russian airspace. The businessman is also puzzled why the travel connection ban did not spread to road or rail transport, but applies only to air travel. The last time Ukraine International’s shareholders received any dividend payments was in 2010.

The negative profitability has forced UIA to significantly trim its schedule. It will cease operating flights to Amman, Minsk and Riga, and all its flights to western European destinations will now be operated during the daytime, meaning its Kyiv hub will accommodate only one transit wave. In the altered flights programme, flight frequencies to Brussels, Copenhagen, Stockholm, Krakow, and Madrid will be increased to daily and flights between Kyiv and London and Kyiv and Vilnius will be operated double daily, the airline points out in a press release. All UIA flights to Cairo, Dubai, Ankara, Izmir, Yerevan, Baku, and Tehran will be operated at night-time and flights to Tel Aviv, Istanbul, and Tbilisi will be operated several times per day, the statement adds.

The biggest individual headache for Ukraine international remains the continuing banning of flying rights over Russian territory, a regime that was imposed in 2014 following the start of the conflict between two once-friendly sister countries. This political issue translates to even more fuel costs and other expenses, leading to huge additional cost increases, because having to navigate around Russian airspace has forced UIA to radically change many of its routes. “We’re now spending an extra US$12,000 for the flight from Kyiv to Almaty, $17,000 to Nur-Sultan and $5,000 to Baku, for example,” Maiberg cites. “If we operate a Boeing 767 to Bangkok we pay an additional US$7,000 and $10,000 if it’s a B777. So, in four years, this has added up to [a total of] US$216 million of extra spending on fuel and avoiding Russian airspace, and the latter problem accounts for the bulk of this money.”

Another plague has been the rise in general aviation market fuel prices. According to Maiberg, fuel excise duties in Ukraine add a further US$32.51 to the already costly price of every tonne of fuel purchased which, historically, is already on average $60 higher than in neighbouring countries. A contributory factor to this could be that the country has a sole aviation fuel manufacturer in its Kremenchug oil refinery. Ironically, the refinery and the airline have shareholders in common – Igor Kolomoysky and Pavel Ovcharenko. Maiberg insists though: “The Kremenchug refinery is a separate commercial company and we have a transparent partnership under which UIA as a customer gets a quote based on the purchase volumes. They won’t detriment themselves, will they?” So, with the excise duties, one tonne of fuel comes at a price of US$90, and the airline purchases roughly 150,000 tonnes of it annually in Ukraine.

All of this adds up to ever-thinning resources for the leader of the Ukrainian air travel market as it gradually sheds its lowest revenue-generating routes and places a number of important infrastructure projects on hold. Worse still, after suspending its Colombo (Sri Lanka), Almaty and Nur-Sultan (both — Kazakhstan) services, the airline has seen its share of transit passengers through its Kyiv Boryspil base airport decline from 28 to 23 per cent.

At the same time, to reflect current demand fluctuations, the changing dynamics of connecting traffic, Ukraine’s national economic plight and the inability to benefit from Russia’s airspace, Ukraine International has further admitted it is in the process of optimising its Boryspil International airport hub improvements project. Its statement reveals that the new flights schedule is to be introduced from November 16 and will be in effect for the IATA winter and summer 2019/2020 schedules.

The airline further reveals that non-stop Kyiv to Beijing services are being put on hold while the frequency of the Kyiv-Bangkok-Kyiv route will be reduced to three a week. The airline declares, somewhat sternly: “These changes will be in effect until the government of Ukraine comes up with an efficient solution for ensuing arm’s length terms for Ukrainian carriers that are obliged to by-pass the airspace of the Russian Federation when operating eastbound flights.”

Despite all of these financial woes, Ukraine International nevertheless plans to add at least two Embraer E195s to its fleet next year – or maybe four if the conditions become more favourable. Currently, three Boeing 737MAXs in UIA livery are parked at Boeing’s Seattle facility after the type was grounded worldwide just two weeks prior to their initial Ukraine delivery dates.