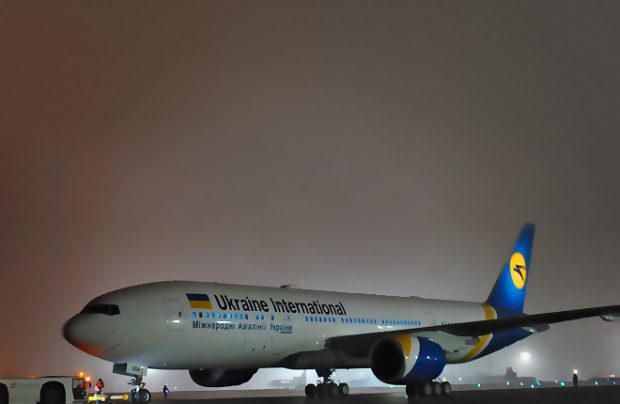 As a part of an ongoing fleet renewal and expansion program, Ukraine International Airlines (UIA) took delivery of its first Boeing 777-200ER widebody and yet another Boeing 737-800 narrowbody earlier this month.

The arrival of the first 777-200ER, on lease from AerCap, marks the initial stage of UIA’s long-haul fleet development program. Three more 777s are scheduled to arrive between March and September 2018, the carrier reports. Prior to delivery the pre-owned airliners are to undergo heavy maintenance checks and full reconfiguration. The job will be performed by Air France Industries KLM Engineering & Maintenance in Amsterdam.

The 777s will supplement the airline’s existing long-haul fleet of four ageing Boeing 767-300ER, which will not be returned to the lessors yet. As a result Ukraine’s national carrier’s long-haul fleet will be more than doubled.

UIA’s first 777, which received local registration UR-GOA, accommodates 361 passengers in a three-class configuration with 21 in business, 16 in premium economy, and 324 in coach. The carrier plans to deploy the aircraft on routes from Kyiv to New York, Beijing, and Bangkok.

“The arrival of the Boeing 777 redefines the UIA service,” – the company’s spokeswoman Evgeniya Satska remarked. “We expect our brand new product to be highly appealing to both travelers from Ukraine and transit passengers. The latter empower us to keep boosting transit traffic at Kyiv’s Boryspil International Airport and developing our country’s transit potential.”

Earlier in the month UIA added another Boeing 737-800 narrowbody to its fleet, which became its 27th 737NG. Built in 2009 and leased from Dubai Aerospace Enterprise, the aircraft has been registered locally as UR-PSZ. It seats 186 passengers in two classes. The airliner has already commenced revenue services for the carrier.

“We will keep enhancing and renewing our fleet in 2018, as well as expanding our flight geography and increasing frequencies on a number of routes,” Ukraine International Airlines says in a statement. “In 2018 we expect to set a new record by carrying 8 million passengers.”

UIA operates a total of 43 aircraft.