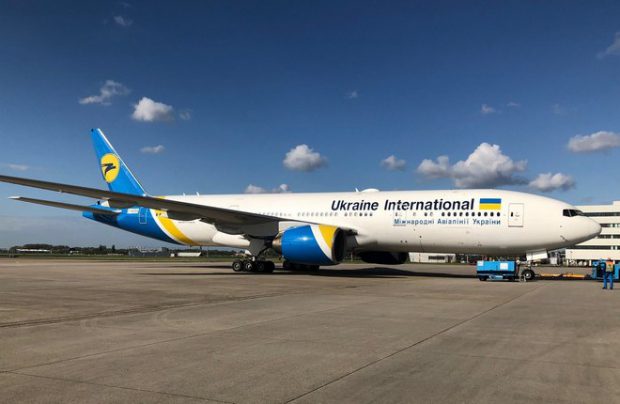 Implementing its long-haul fleet expansion programme, Ukraine International Airlines (UIA) has taken delivery of its second widebody Boeing 777-200ER, with a third of the type scheduled to arrive at the end of May, the carrier reports.

The latest arrival is a 17-year old aircraft (with manufacturer’s serial number 28681 and new registration number UR-GOB) under lease from AerCap. The previous and only operator of the PW4000-powered B777 was South Korea’s Asiana Airlines.

In total, by the end of the third quarter, Ukraine’s largest carrier is planning to operate four Boeing 777-200ERs, all of which will have an identical three-class layout designed to accommodate 361 passengers: 21 in business class, 16 in premium economy and 324 in economy.

With their long range capability and high passenger capacity, the triple-sevens will play an important role in the development of UIA transit flows through its base airport of Kiev Boryspil, as the airline pays special attention to improving the passenger experience.

Prior to delivery, each pre-owned airliner will undergo full reconfiguration by Air France Industries KLM Engineering & Maintenance in Amsterdam.

Each aircraft comes equipped with a Panasonic on-demand inflight entertainments system, with all seats having a personal monitor, individual power sockets and USB charging points. UIA is the first Ukrainian airline to offer Wi-Fi connectivity on board.

All three passenger cabins are equipped with a modern lighting system which, the airline says, “creates a special atmosphere and comfortable conditions” for passengers during the flight.

“The growth of our long-haul fleet by adding this second Boeing 777-200ER will significantly increase the level of comfort for passengers traveling long distances,” notes Evgeniya Satska, UIA’s communications director. “The qualitatively new product of UIA will be interesting both for Ukrainian and for transfer passengers, and will raise the attractiveness of the Boryspil International Airport as a hub and attract new transit flows to Ukraine,” she adds.