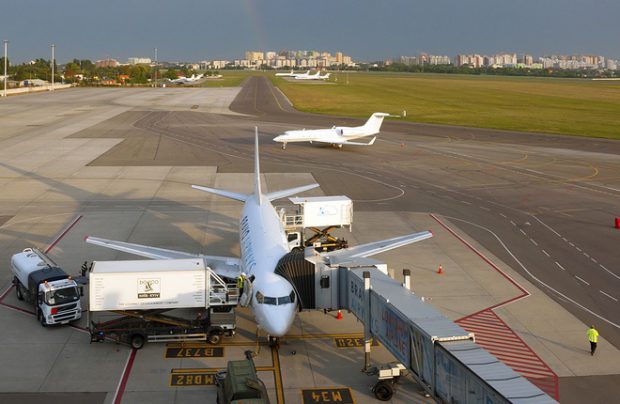 During the first eight months of 2018 IEV handled some 1.857 million passengers, up 62.8 per cent year-on-year (Kyiv International Airport)

Kyiv’s Igor Sikorsky International Airport (IATA code IEV, and known as Zhulyany prior to March 2018,) enjoyed a spectacular 54.9 per cent traffic surge in August. The vast majority of the 358,300 passengers who passed through Ukraine’s second largest airport travelled internationally (350,200), whilst 8,100 used domestic services.

The airport has not outlined the reasons for such an impressive growth, but known influencing factors are Ukraine’s introduction of a visa-free relationship with the European Union, the increased activities of low-cost carriers such as Wizz Air and Ernest Airlines, and the arrival of new airlines, one such example being Ukrainian start-up carrier SkyUp Airlines.

Not surprisingly, the number of aircraft movements increased by 33.2 per cent compared to the same month of last year (3,258 movements). The list of preferred destinations last month consisted largely of leisure destinations, including Sharm-el-Sheikh (Egypt), Antalya, Ankara (both in Turkey), Tivat (Montenegro) and Batumi (Georgia), as well as Warsaw (Poland) and Minsk (Belarus). Inside Ukraine, passengers travelled mostly to Odesa, Zaporizhye and Lviv.

In the period from January to August 2018 the airport handled a total of 1.857 million passengers, up 62.8 per cent year-on-year, of which 1.8 million were international. The 43 airlines that serve the airport’s route network of some 140 destinations collectively operated 20,092 flights, up 37.2 per cent year-on-year. The list of the most popular destinations, in addition to those previously mentioned, included Dubai (UAE) and Rome (Italy).