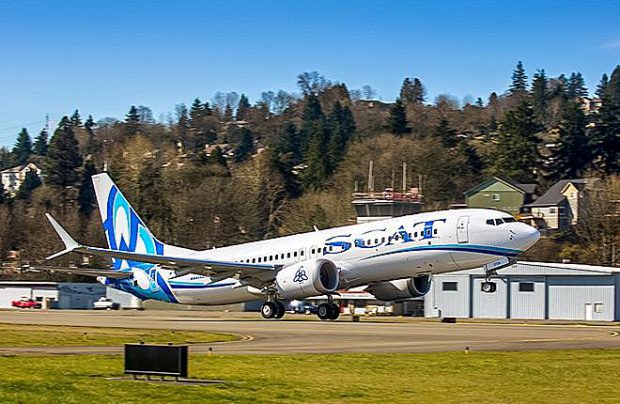 In a move that will stimulate further competition in the Kazakhstan air transport market, privately owned SCAT Airlines – the central Asian country’s second largest carrier by passenger traffic – has announced a contract for two Boeing 737MAX 9 jets. The Chimkent-headquartered carrier claims it will be the first operator of the new type in the CIS and central Asia regions.

The latest additions are scheduled to join SCAT’s fleet this May as part of the carrier’s overall capacity expansion effort. They will be operated both on international and domestic routes within the next IATA summer season, the airline states.

Unlike the Boeing 737 MAX 8 – which the airline is receiving in a single-class 186-seat configuration – the more spacious -9 will be fitted with two-class 189-seat cabins with as many as 16 in business.

The original contract for six Boeing 737 MAX 8s signed in November 2017 has remained intact, the Kazakh airline has confirmed to Russian Aviation Insider. SCAT is expecting the remaining five aircraft to be delivered within the contract-prescribed timeframe up to 2022.

SCAT became the first operator of the Boeing 737 MAX 8 in central Asia last March, with the acquisition of the first of the batch of six aircraft financed through Kazakhstan’s national Halyk Bank.

Last year SCAT Airlines carried some 2.2 million passengers, a 15 per cent improvement on 2017. It is projecting further, unspecified growth for 2019, the airline has advised Russian Aviation Insider.

Air Astana, Kazakhstan’s dominant carrier, is currently upgrading and expanding its own fleet with Airbus A320 neos and second-generation Embraer E-Jet Е2s. It is also planning to launch FlyArystan, its low-cost offshoot, in May, thereby putting further pressure on its local rivals.