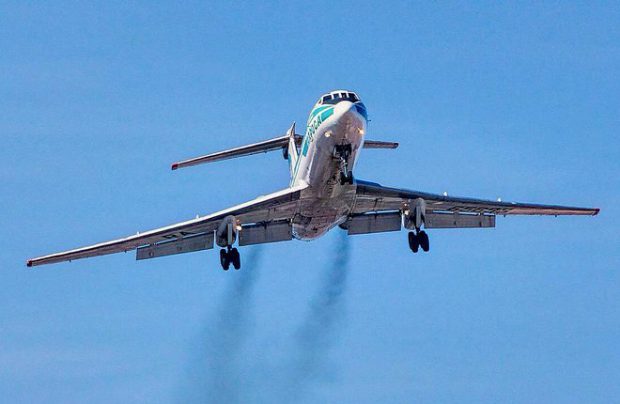 The short-haul Tupolev Tu-134 passenger aircraft – which was banned from European Union airspace in 2002 – has performed its final revenue service in Russia. On May 22, flight 6R-693 operated from Mirny, the administrative centre of the Mirninsky District in the Sakha Republic, to Novosibirsk’s Tolmachevo Airport and in doing so closed a long chapter of commercial operations for the iconic Soviet-era airplane.

Operated by Alrosa Airlines, which is owned by the Russian diamond mining company Alrosa, the final Tu-134B-3 – with registration number RA-65693 – was one of hundreds created by the Tupolev Design Bureau. The type, which first flew in 1963, was designed to accommodate up to 80 passengers.

RA-65693 was commissioned in May 1980 and built at the Kharkiv State Aircraft Manufacturing Company, now in Ukraine. However, the EU flight ban meant that the Tu-134 – one of the most mass produced Soviet civil aircraft with more than 850 units, including the pre-production prototypes – were constricted to use only on domestic routes inside Russia and the countries of the CIS region.

From 1998 to 1999, this specific aircraft was owned by famous Russian singer Alla Pugacheva and was modified to carry 28 passengers. In 2010, it was re-configured to accommodate a 73-seat layout for commercial passengers and then transferred to Alrosa. As of 15 May 2019, the aircraft had accumulated more than 31,000 flight-hours.

Despite those hours, Andrey Gulov, general director of Alrosa Airlines, insists that the current significant increase in aviation fuel costs has proved to be the death knell for the efficiency of the Tu-134 and that is why plans are afoot for Alrosa to replace the type with Russian-built Superjet 100s. Last November Alrosa signed a letter of intent with the State Transport Leasing Company, known by its Russian GTLK acronym, to lease two SSJ100 Russian regional jets.

Meanwhile, the final commercially-operated Tu-134 aircraft will take its rightful place in the Air History Museum at Novosibirsk, whilst all country’s remaining transport Tu-134s remain in service with the Russian ministry of defence.

A younger Tupolev aircraft model, the Tu-204, was retired from commercial service in October 2018 when Red Wings, Russia’s only commercial operator of the type, removed five from its network.