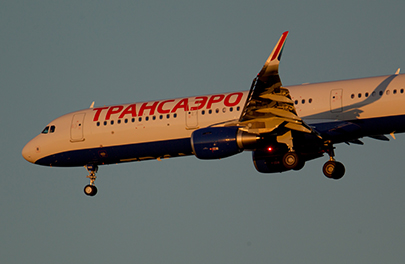 Transaero, currently on the brink of bankruptcy, has rertuned two recently leased Airbus A321s to the lessor, Chinese ICBC Leasing. Two brand-new aircraft (tail numbers EI-VKO and EI-LED) joined Transaero’s fleet straight from the OEM in July and August this year. The carrier had a total of six A321s on order, and was expecting to take delivery of a third one by year-end.

Both returned aircraft are in a two-class configuration, with eight business-class and 176 economy seats. They were intended to replace Transaero’s aging Boeings, which comprised 95% of the carrier’s fleet.

Transaero’s order also included eight A320NEOs and four A380s. The future of these aircraft is currently unclear; they are still listed in Airbus’s official backlog.

Russia’s second largest airline is leaving the market. It continues to provide services under Aeroflot’s operational control but may soon lose its certificate. Aerolot previously said it was prepared to take up to 34 Transaero aircraft (those leased from Russian banks). Aeroflot Group is currently negotiating with the lessors.