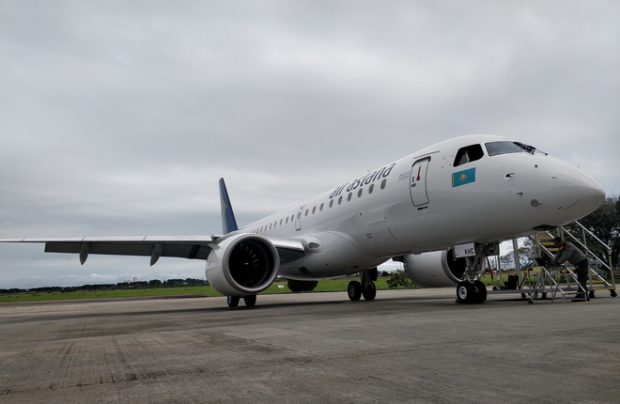 Air Astana, the national carrier of Kazakhstan, has received its third Embraer E190-E2 jet, which arrived directly from the manufacturer’s Brazil factory. It is the third of five second-generation E-jets ordered under a 2017 operating lease agreement with AerCap. The remaining aircraft are scheduled for delivery throughout 2019.

The Pratt & Whitney GTF-powered E190-E2, single-aisle airliner (registration P4-KHC) is fitted with 108 seats in a two-class layout, offering 12 seats in business class and 96 in economy.

Air Astana operates its Embraer 190-E2s on domestic services across Kazakhstan, as well as to international destinations in Russia, central Asia, the Caucasus, Ukraine and China.

The airline will debut the new E2 on commercial services between Almaty and Nur-Sultan (formerly Astana) from 1st June.

Air Astana is a joint venture between Kazakhstan’s national wealth fund Samruk Kazyna and BAE Systems, with shares of 51 and 49 per cent respectively. It operates flights to more than 60 domestic and international routes from its hubs at Nur-Sultan and Almaty.

Air Astana currently operates a fleet of nine older Embraer E190 aircraft on domestic and low-density regional routes, with the first aircraft having entered service in 2011. The new-generation E2 will gradually replace the first-generation E190s in its fleet, with some lease agreements due to expire this year.