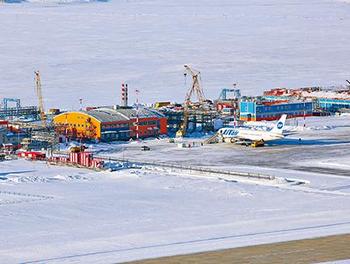 In the last five years, four new aerodromes have been built with private funds in the interests of mineral resource development projects, with South-Tambey onshore gas field being the largest one. The Arctic field’s accessibility is provided for by a recently built Sabetta airport.

Sabetta airport is located near the homonymous rotational village on the eastern coast of Yamal peninsula, just off the coast of the Gulf of Ob in the Kara Sea. The airport sa and expects to welcome an international flight before year-end.

According to Yamal LNG’s 2014 records (60% of shares owned by Novatek; French Total and Chinese CNODC have 20% each), the field’s estimated reserves stood at 44 trillion cubic feet (tcf) of gas and 550 million barrels of condensate. The proven reserves stood at 1.26 tcf of gas and 51.6 mt of gas condensate. This secures the plant’s capacity utilization for 20 years ahead, and brings Yamal LNG’s liquefied gas market share to roughly 3%.

“ The field’s remoteness from the existing overland transport infrastructure may jeopardize smooth transportation of shift workers at peak construction periods. That risk was minimized in 2014 when Sabetta airport became operational,” Yamal LNG emphasizes in a statement.

Sabetta is the fourth airport built in the last five years under the auspices of mineral resource development projects. Earlier, Kupol airport operated by Chukotka Mining and Geological Company (controlled by Canadian Kinross Gold) was opened near Kupol gold and silver mining field in Chukotka. The airport has an unpaved runway. Another airport was built in Yakutia, it serves Talakansk oil and gas condensation field. Talakan airport is an affiliate of Surgut airport.

On Yamal peninsula itself, there is another oil and gas field, Bovanenkovo. An airport with the same name operated by Gazprom-avia is just 170 km from Sabetta airport. However, having analyzed all of the transportation options and compared delivery of staff by airplanes versus helicopters, Yamal LNG came to the conclusion that building a dedicated airport for the field would be the best solution.

Construction of Sabetta started in 2012. Yamal LNG’s spokesperson told Russian Aviation Insider that the company sent its specialists to  adopt best practices from Talakan and Bovanenkovo. They also studied the operational experience of Arctic airports in Norway and Canada.

Sabetta airport constructors’ main challenge was the runway. “In our climate the only material that can be used for aerodrome pavement is the prestressed concrete plate PAG-18. We had to lay 15,000 of such plates sized 6 by 2 m and weighing 5.2 tons each!” Dmitry Monakov, first deputy director for construction, Yamal LNG, tells. “The main problem we faced was that Russian plants have long stopped producing these plates in such industrial volumes. We had to hold a serious competition and we had to give the winner some time to grow their production capacities before they were able to satisfy our requirements.”

In a couple of years, on December 4, 2014 the Arctic airport received its first technical flight from Tyumen. It was UTair’s Boeing 737 that first touched down on those plates.

At the end last year Sabetta airport with its 2704 m long and 46 m wide runway got listed in the State Register of Airports and Aerodromes. This past summer the passenger terminal became operational, and can now serve up to 200 passengers per hour – 150 in domestic and 50 more in international parts. A 4500 t refueling complex was certified at the same time.

“Aviation fuel is brought to Sabetta by the Northern Sea Route. I think that with the current flight schedule this capacity will last us a year,” Leonid Schwartz, general director of Sabetta International Airport tells Russian Aviation Insier. This entity is fully owned by Yamal LNG and is responsible for operating the airport.

We talked to the new airport’s top-manager, who previously was at control of Kurumoch Airport in Samara, in Yamal LNG’s Moscow office. From here it’s almost 2400 km to Sabetta, but technology makes it possible to watch the airfield: Leonid’s computer screen shows live video-stream from the cameras located in far-away Yamal.

Former head of Kurumoch joined Yamal LNG project at the end of 2012. He had no shortage of employment offers, but chose Sabetta over others as a favor to an old friend Leonid Mikhelson, who once launched his business in Samara, and is currently Novatek’s chairman o the board. “I’ve known him for ever, so I didn’t even bother to negotiate the terms of the contract,” Schwartz admits.

He says that the new airport’s management team and staff is mostly made of former Kurumoch employees, and is therefore really tight-knit. Once a month the new shift of 110 specialists along with the shift airport director arrives from Samara to take the place of their colleagues.

“The climate is so stern, that you can’t stay there for too long, the doctors object,” Schwartz explains. The administration, including himself and about two dozen of managers, analysts and accountants are based in Moscow. At the end of July the Russian government assigned a border inspection post to be located at the airport. Sabetta airport expects to serve its first flights to China and France, in the interests of its foreign stakeholders, before the year-end. “That way, Sabetta will become the world’s Northernmost international airport,” Leonid Schwartz says.

By the end of 2015 Sabetta’s traffic is expected to exceed 100,000 passengers, mostly shift workers from Tymen, Ufa, Samara, Moscow and Novy Urengoi. This should be enough to break even, according to Schwartz. The executive associates further growth with increasing number of shift workers in the rotational village. “There will be 15,000 of them by the year-end, and then up to 23,000. All this mass of people needs to get there, and get back.” Another direction of development, that could have a positive impact on the airport’s operational results, is building a hangar for business-jets and a cargo terminal. These facilities should be available in the short term.

Until Yamal LNG project is completely up and running, Sabetta’s general director refrains from discussing the future of the airport in terms of commercial flights. Everything depends on airlines’ interests. He explains, that the Arctic development is progressing well, therefore the airport’s prospects are quite bright. It may even be used for flights to North America over the North Pole.

Speaking of investments, Leonid Schwartz gave an evasive reply. “When we’re through with construction, I’ll give you the numbers, but right now it’s confidential,” he said.