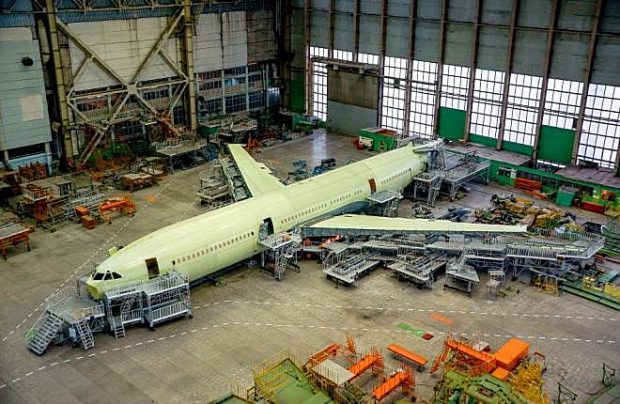 Russian aircraft manufacturer Ilyushin (IL), which is part of United Aircraft Corporation (UAC), has reported that the first flying prototype of its IL-96-400M modernised widebody airliner has reached the final assembly stage at the Voronezh Aircraft Production Association (VASO) plant.

It means that the upgraded four-engine wide-body airliner programme is nearing the first flight stage, albeit with a two-year delay and with no commercial airline thus far having announced a willingness to act as the launch customer for the aircraft.

VASO has now attached the wing to the fuselage and commenced the installation of flight control systems and cabin interior, Ilyushin’s statement reads. The flight test prototype’s final assembly is due to be completed before the end of this year, followed by a series of ground tests. Thus the first IL-96-400M will not take to the skies before 2021.

The programme, which kicked off in 2016, was initially scheduled to reach the maiden flight stage in 2019 so that, by 2021, the first two serially built airliners would enter service with as yet non-existing customers. In a December interview with state-controlled RIA Novosti newswire, Ilyushin’s general director Yury Grudinin attributed the delays to the complexity of the “serious upgrade” of the aircraft’s platform, and to VASO’s tight schedules. “A minor shift of the maiden flight [date] may occur due to the Voronezh plant being busy with other projects. It is steadily loaded through to 2026.”

The IL-96-400M is a comprehensively upgraded passenger version of the ill-fated IL-96-400T freighter aircraft, which in turn is a modernised iteration of the IL-96-300 platform, with a fuselage stretched by 9.65 metres and a 20-tonnes higher maximum take off weight (MTOW).

The base IL-96-300 made its maiden flight in 1988, with Russian flag carrier Aeroflot becoming the first airline to operate the type in 1993. The first IL-96-400T freighter was delivered in 2009 to Polyot Airlines, the now non-existent subsidiary of VASO. Up to now, VASO has built four of the four-engine freighters, with two (RA-96101 and RA-96103) stored at VASO, and the other two (RA-96102 and RA-96104) utilised by state customers in refurbished passenger versions.

According to Ilyushin, the passenger IL-96-400M will have three cabin layout options of a single economy class for 402 passengers, a two-class configuration with 350 seats, and 305 seats in a three-class layout.

The upgraded aircraft is to be powered by the PS-90A1 engine, a modified Russian-made PS-90A powerplant that has powered the IL-96-400 since 2007. According to UEC-Aviadvigatel, the engine’s producer, the upgraded version conforms 98 per cent with the original PS-90A specifications.

Ilyushin is promising to fit out the airliner with modern avionics that are compliant with the existing and future requirements of international aviation standards and will allow for a two-manned crew operation.

The upgraded aircraft will require a supplement to the IL-96-300’s existing type certificate.

The project’s main disappointment is the absence of any firm orders, with no sign of real – not declarative, politically motivated – interest from commercial airlines. In 2017, Ilyushin announced that the upgrade would require a financial injection of more than 53 billion roubles (US$0.85 billion), including 10 billion roubles for research and development, 1.5 billion roubles for upgrading VASO’s manufacturing facilities and 42 billion roubles for topping up the capital of the state-owned leasing company, which would act as the aircraft’s customer. In 2018 the Russian government allocated 1.32 billion roubles to UAC for the programme.

UAC previously confirmed plans to build six serial aircraft before 2025 at the rate of two or 2.5 units per year.