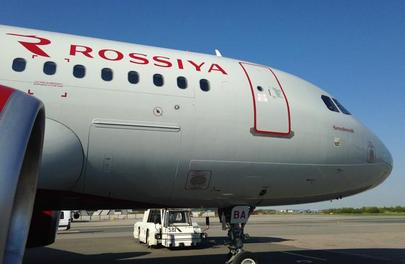 The paint shop of S7 Engineering, a part of the Engineering Holding, re-delivered to Rossiya Airlines its Airbus A319 after repainting it into the carrier’s new brand livery. The St. Petersburg-based airline, which has recently been reshaped through merging with other subsidiaries of Aeroflot, is currently redefining its corporate style. The first to receive the new livery were the four newly leased aircraft, previously operated by either Transaero or Rossiya’s parent company, Aeroflot. All, except the one painted by the S7 Engineering, were repainted outside Russia. The very first one, a Boeing 747 was repainted by Eirtech in Ireland. Two Airbus A319s were done by the British provider Air Livery.

The provider used a base coat / clear coat system from Dutch producer Akzo Nobel. The painting team used a large number of stencils along the entire fuselage, as Rossiya’s new livery features a complicated design. After completing the painting job, S7 Engineering conducted the weighing of the aircraft and Weekly checks.

“Our choice of contractor was determined by a number of factors: the paint shop’s technical capabilities for the aircraft type, slot availability, and ultimately, by the results of the tender, which enabled us to select a provider with the optimal value for money solution,” Rossiya’s spokesperson told Russian Aviation Insider.

Rossiya is satisfied with the results and is ready to continue cooperation with the Engineering’s paint shop. In December 2015, S7 Engineering painted another one of Rossiya’s aircraft, an A320, into its previous livery.

Rossiya expects to have its entire fleet repainted in 2017.