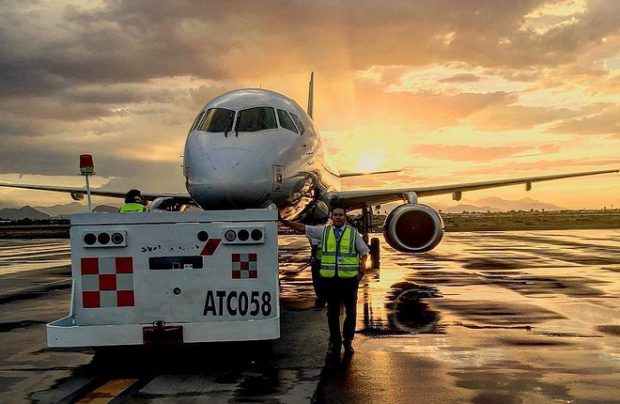 Russian aircraft manufacturer Sukhoi Civil Aircraft Company (SCAC) has moved a step closer to extending its slender Asian customer base with the signing a letter of intent (LoI) with Thailand’s start-up Kom Airlines, which is considering the acquisition of six Superjet 100 aircraft and aims to confirm a firm order in 2019. As with other recent deals for the Russian regional jet, SCAC is proposing to add maintenance, repair and overhaul (MRO) support for the operator.

The LoI was signed during a December 27 visit to Thailand of Denis Manturov, Russia’s minister of industry and trade. According to the terms of the accord, the aircraft are to be delivered in the 2019-2020 period if, as anticipated, the agreement is turned into a firm order in the first half of 2019, a SCAC statement reads.

Kom Airlines is reportedly interested in the 100-seat single economy class configuration of the Superjet and is considering using the aircraft for both domestic and international services in the region.

To address the challenging SSJ100 after-sales support issue, Sukhoi Civil has signed another LoI with local MRO provider WishV to support the maintenance needs of the SSJ100. Accordingly, WishV is in the process of obtaining approval for an SSJ100 maintenance station in Thailand, says SCAC. Its hangar facility is located at U-Tapao Rayong-Pattaya International Airport, a joint military-civil airport within the Royal Thai Navy’s Sattahip Naval Base, which is 30 km from Pattaya city. WishV is currently qualified to work with Embraer, Boeing, Cessna, Dassault, Bell Helicopter and Bombardier aircraft.