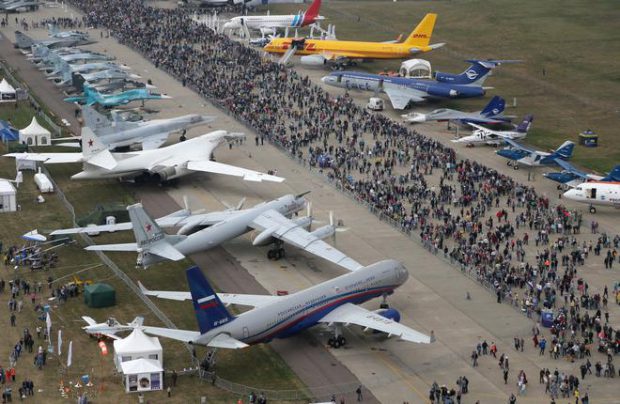 The MAKS static display will showcase a variety of aircraft types, newly-designed and well-known ones alike. (Fyodor Borisov / Тransport-photo.com)

Zhukovsky airfield outside Moscow will be hosting MAKS 2017, Russia’s key aerospace exhibition, on July 18-23 July. Listed below are the top 10 of this year’s most anticipated global aviation debuts. Although it is as yet unknown whether all of these new aircraft will actually be on show at Zhukovsky (we supply the five-point probability rate for each of them), they are all worth keeping an eye on. We hope the following piece will move you to visit MAKS this summer. Country of manufacture: Russia
Category: single-aisle passenger jetliner
Service entry According to the latest reports, the MC-21’s maiden flight is set for this spring. The type is expected to enter service in 2018.
What is so interesting about it? The Irkut MC-21 family of passenger airliners, designed from scratch in Russia, will be the first domestically manufactured airplanes fitted with a weight-saving composite wing. Although the MC-21 is classed as a narrowbody, it has a noticeably wider cabin as compared to its main competitors, the Boeing 737 and Airbus A320 single-aisle families. The airliner’s broader aisle is supposed to speed up the boarding and disembarkation.
Probability of being on show: ★★★★☆ Country of manufacture: France, Germany, UK, Spain
Category: single-aisle passenger jetliner
Service entry The first A320neo was delivered to launch customer Lufthansa in January 2016. As of March 31, 2017, 94 of the type were in service across the globe.
What is so interesting about it? The A320neo is a fine example of the ongoing trend to re-engine popular aircraft types with new-generation powerplants. The airliner’s all-new engines and improved aerodynamics make it 20% more fuel efficient than the previous version, and approximately twice as quiet. The market has been excited about the upgraded model, with Airbus securing a total of 3,616 re-engined examples (a total of 4,722 A320s with previous-generation powerplants have been built since the program’s launch 30 years ago). If we are to factor in the A319neo and A321neo models, the figures will stand at 5,056 and 7,939, respectively. S7 Airlines is to become the first Russian operator of the A320neo family, having ordered three A321s and 16 A320s; deliveries are expected to start this year.
Probability of being on show: ★★☆☆☆ The MAX 8 is the first re-engined version of the Boeing 737
(Leonid Faerberg / Тransport-photo.com)

Country of manufacture: USA
Category: single-aisle passenger jetliner
Service entry The Boeing 737 MAX 8 is the latest modification of Boeing’s new series to enter the market. The all-new aircraft is expected to commence commercial operations in Q2 2017 with Malaysian carrier Malindo Air.
What is so interesting about it? The Boeing 737 MAX is the fourth generation of the world’s best-selling commercial aircraft family, which turns 50 this year. The peculiar feature of this family, which also encompasses the Boeing 737 Classic and the Boeing 737NG, the peculiar feature of the entire family is its short main landing gear (as compared to the A320 family) and, consecutively, the lower engine ground clearance. As a result, the Boeing nacelles of the CFM56 powerplant have the distinctive flat-bottomed shape. In order to accommodate the LEAP-1B’s greater diameter, the engine was moved further aft of the 737 MAX’s wing and pout higher on the pylon. The upgraded aircraft also features a longer nose gear strut, which gets it a slight nose-up attitude on the ground. Globus (a subsidiary airline of S7 Group) will be the first Russian carrier to operate the new version. The carrier has placed an order for nine Boeing 737 MAX 8s, with deliveries expected to start in 2018.
Probability of being on show: ★★★★★ The CSeries family comprises two modifications, the CS100 and the CS300 (as shown)
(Fyodor Borisov / Тransport-photo.com)

Country of manufacture: Canada
Category: single-aisle passenger jetliner
Service entry Both versions of the new Canadian airliner have already been introduced into commercial operations. The less spacious CS100 was delivered to Swiss in June 2016; the CS300 stretch commenced service in December 2016 with Latvia’s airBaltic. As of early April, the total number of aircraft delivered stood at 10.
What is so interesting about it? The CSeries family was designed from scratch, and is supposed to be capable of performing transatlantic ferry flights. The manufacturer’s past experience with regional airliners resulted in a narrower cabin, with just five seats abreast (similar to the Superjet SSJ100) instead of the conventional six-abreast arrangement for this category of aircraft. Despite the modest seating capacity of the all-new Canadian jet, experts say it can still challenge the long-lasting Airbus/Boeing duopoly on the narrowbody market. The CSeries construction incorporates a significant portion of composite materials, which makes it more lightweight than the competitors.
Probability of being on show: ★☆☆☆☆ Country of manufacture: Brazil
Category: single-aisle regional passenger jetliner
Service entry The E2 family comprises three types. The E190-E2 will enter the market in 2018, followed by the E195-E2 in 2019 and the E175-E2 in 2021.
What is so interesting about it? The Embraer E-Jet E2 is a new-generation upgrade of the Embraer E-Jet series of regional airliners. Similarly to the A320neo and Boeing 737 MAX, the project capitalizes on newer, more efficient engines. The upgraded aircraft also get a redesigned wing and have the original hydromechanical flight control system replaced with FBW architecture.
Probability of being on show: ☆☆☆☆☆ Country of manufacture: Russia
Category: medium utility helicopter
Service entry The Ka-62 first flew in April 2016. Back in 2015 it was expected that certification would be completed by 2017.
What is so interesting about it? The Ka-62 prototype was first shown to the public on the 2015 MAKS static display. This year, it may perform a demonstration flight. As distinct from all the other Kamov helicopters, which are fitted with coaxial main rotors, the Ka-62 has a classic configuration, with a single main rotor and a tail rotor. The new model and its Ka-60 baseline version are the first Russian-designed rotorcraft with a shrouded tail rotor. This prevents the tail rotor blades from contacting other surfaces, and is also more aerodynamically efficient than the conventional configuration.
Probability of being on show: ★★★★★ Country of manufacture: Russia
Category: light utility helicopter
Service entry The first two navalized helicopters were delivered to the Russian Border Guard Service in March 2017.
What is so interesting about it? This navalized version of the Ka-226 has folding main rotor blades and is fitted with eye lugs for securing it to the flight deck of a ship. The project is based on the Ka-226 helicopter, which was developed to meet the requirements of the 2003 Indian Air Force tender. It is fitted with more powerful (up to 705 hp) French-made Arrius 2G1 engines.
Probability of being on show: ★★☆☆☆ The Mi-8АМТSH-VА is the Arctic version of the Mi-8 helicopter series
(Fyodor Borisov / Тransport-photo.com)

Country of manufacture: Russia
Category: medium utility helicopter
Service entry The first such helicopter joined the Arctic Division of the Russian Armed Forces in the fall of 2015.
What is so interesting about it? The Mi-8АМТSH-VА was designed to withstand the severe low temperatures of the Arctic region. It has a heating system for the cockpit and cargo compartment, improved insulation, and heat insulation curtains. The engines and the transmission are fitted with independent heaters for better reliability, and the hydraulic oil and fuel lines are made of cold-resistant teflon.
Probability of being on show: ★★★★★ Country of manufacture: Russia
Category: G4+ multirole fighter
Service entry Deliveries started in 2013.
What is so interesting about it? The Su-30SM is marketed as the first-ever superagile fighter jet thanks to its Saturn AL-31FP engines with thrust vectoring control. The aircraft is a “domestic consumption” version of the Su-30MKI fighter, which was customized for the Indian Air Force. It has a maximum airspeed of 2,125 kph. The new version is now flown by the Russian Air Force Russian Knights display team, which used to fly Su-27s.
Probability of being on show: ★★★★★ The maiden flight of the Il-112V prototype is scheduled for 2017. (United Aircraft Corporation)

Country of manufacture: Russia
Category: light military transport aircraft
Service entry Deliveries to the Russian Military Space Forces are to begin in 2021.
What is so interesting about it? The llyushin Il-112V turboprop is aimed to replace the aging fleet of Antonov An-26s. The new aircraft has a classic high-wing configuration and, as a military airlifter, is to be able to operate from unpaved runways. The manufacturer expects the first prototype to fly in 2017.
Probability of being on show: ☆☆☆☆☆