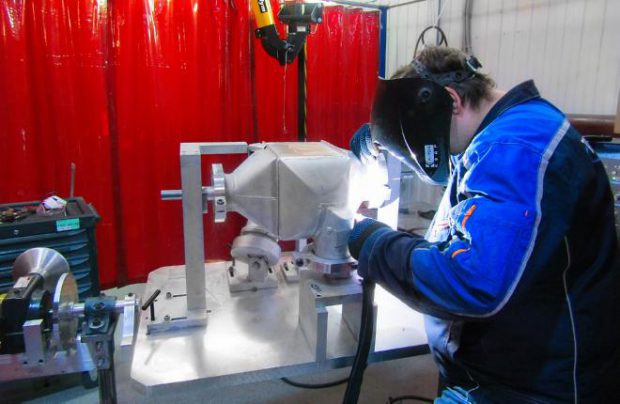 Russian provider of MRO services on aircraft heat exchange systems, TAT Engineering is eyeing new aircraft types, considering FAA certification and targeting a seven-fold increase in production output by the end of this year. The near-term plans include adding Sukhoi Superjet 100 heat exchangers to its capability list as well as obtaining an approval for overhauling equipment for Bombardier CRJ100/200.

“The target for 2018 is servicing approximately 1,000 heat exchangers. Our main customers are the key aviation industry players from Russia, the CIS and beyond,” TAT Engineering’s general director Denis Yelnikov told Russian Aviation Insider.

Last year Novosibirsk-based company provided maintenance and repair works on 130 heat exchangers installed on different types of aircraft. According to Yelnikov, the company launched full-scale operations in October, so for such a short period of time the result is quite significant. “Such a quick start had a crucial influence on the business development and accumulation of competences by the personnel,” he commented.

TAT Engineering is a joint venture between TAT Technologies and S7 Technics. It was registered in April 2016 and received its EASA Part 145 approval in May 2017.

The provider is now entitled to render MRO services on 13 types of heat exchanging equipment installed on aircraft, which are most popular with Russian airlines. The company claims that its objective is to expand its capabilities so that more operators have an opportunity to service their equipment inside Russia, saving costs and time on sending them abroad.

“This will allow TAT Engineering to get additional orders from our existing customers and attract new clients,” Yelnikov says, adding that the list of key customers in 2017 included parent S7 Technics and S7 Airlines as well as IrAero and UVT-Aero. In December TAT Engineering signed a contract with Turkish Technic.

Notably, last year the provider was expecting to obtain FAA certificate, which would enable it to cooperate with such companies as, for instance, Lufthansa Technik. However, “the process is not a fast one,” Yelnikov admits. “We submitted our application in August 2017, and as of today we are at the third out of four stages.” The company is hoping to receive the approval by mid-2018.

As part of its business development strategy TAT Engineering is investing in its personnel and production facilities. To start maintaining SSJ100 and CRJ100/200, for example, the company’s technicians are taking a theoretical course abroad and practical training in-house. The provider has also purchased additional equipment for testing and maintaining oil heat exchangers.

Yelnikov notes, that due to wide use of state-of-the-are technologies, the number of staff involved in heat exchanger maintenance procedures is relatively small. As of the beginning of 2018 TAT Engineering employed just 14 specialists. “In 2018 we are going to boost production and strengthen the staff by 20%. There’s also need to draw new specialists since we’re adding oil heat exchangers to our capability list. This is a new type of equipment for us, which we intend to master this year,” the top-manager comments.

He also emphasized that all these measures are bringing TAT Engineering closer to its objective – to become a full-scale maintenance center for heat exchangers in Russia and the CIS.