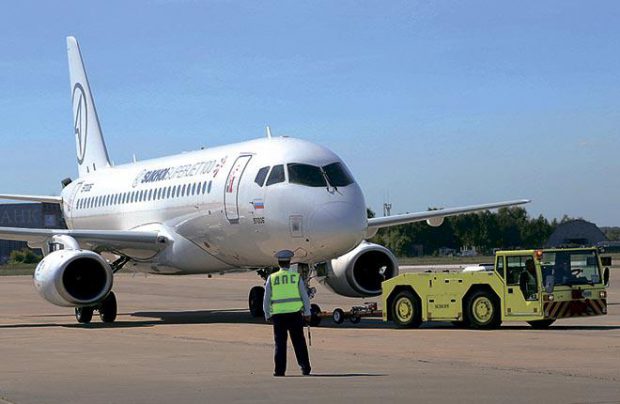 SSJ100 operators have to take their own tow-bar with them to airports that use tow-barless tugs (Photo by Fyodor Borisov // Transport-photo.com)

Russian operators of the Sukhoi Superjet 100 (SSJ100) regional aircraft are hoping that, from the spring of 2017, the type will be approved for tow-barless (TBL) airport tug operations. The upgrade will save time, money and remove the inconvenient drag of unwieldy airport towing maneuvers for operators, the manufacturer says.

Although the original design of the SSJ100 regional jet did not offer the TBL option, manufacturer Sukhoi Civil Aircraft Company (SCAC) is currently preparing the necessary documentation to meet certification requirements for it.

The project is being carried out in close cooperation with the aircraft’s landing gear designer Safran Landing Systems (formerly Messier-Bugatty-Dowty), as well as with towing tractor manufacturer TLD. Such approvals will apply to the use of SCAC-certified tugs only.

“In accordance with the plan, the service bulletin containing the scope of work and documentation update requirements for TBL towing operations will become available in May, 2017,” a SCAC representative has revealed to Russian Aviation Insider.

If an operator decides to take up the TBL option, it will – at its own cost – have to satisfy all the conditions of the bulletin, and have the engineering works carried out by Safran experts at operators’ own sites.

Future models of the aircraft type will be equipped with the TBL towing feature. The exact dates and serial number of the first enhanced version are yet to be decided by SCAC. “The operators of early SSJ100s will have to cover the modernization expenses themselves as the TBL towing option means improving the airplane’s consumer appeal,” SCAC notes.

From the start of SSJ100 operations in the spring of 2011 (and as of December, 2016) SCAC had received modification requests for the TBL towing option from only two operators. “One of them is foreign and the other domestic. Dealing with such kinds of customer requests is a priority for us, so we are working hard to solve the problem,” SCAC emphasizes.

Among Russian operators of SSJ100 regional jets, Yakutia appears to have the biggest concerns about its aircraft not being TBL-friendly. The representative of this Far East-based carrier was the only speaker to draw attention to the problem at the SSJ100 Operations Conference that took place in November last year.

“We have been raising this issue ever since the SSJ100 was first brought to operation,” the representative pointed out. “We fly to China, Korea and Japan and they all have tow-barless tugs there.”

“Not having this option creates additional problems to us. First we have to fit each of our aircraft with a tow-bar and then we have to carry it around all over the place. This is extremely inconvenient when flying to international airports that operate TBL tugs only.”