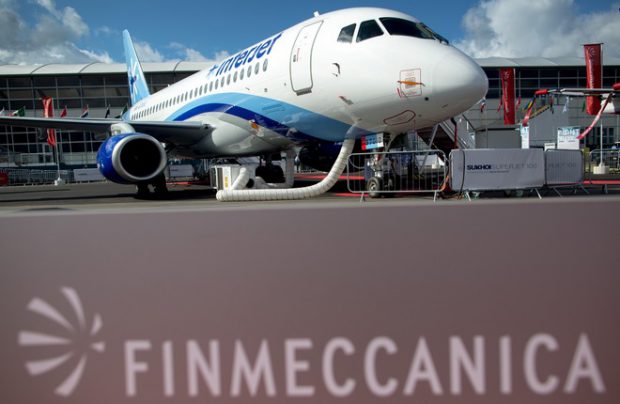 The Italian partner helped to promote SSJ 100 on the Western markets (Photo by Leonid Faerberg / Transport-Photo.com)

The blocking stake belonged to the Italian Finmeccanica holding (formerly Alenia Aeronautica), SSJ 100 program strategic partner which invested $183 million into the project in 2009.

The Italian company can also minimize its stake in SuperJet International (SJI), another joint venture with Sukhoi. The company performs SSJ 100 maintenance and personnel training as well as customization and deliveries for foreign customers. Accodring to Kommersant daily, Finmeccanica can cut its interest in SJI from 51 to 10%.

SCAC refused to comment on the deal. United Aircraft Corporation (UAC) representative told Russian Aviation Insider that SCAC consolidation process can be completed this year but the partners can disclose further details in several weeks.

The talks to change the format of the Italian party’s participation in SSJ 100 have been going on for about two years. In the autumn of 2014 the Russian government decided to support SCAC via a 36 billion rubles share capital injection. The additional shares were purchased by Sukhoi raising its stake in the company to 94.47% leaving Finmeccanica with a 5.53%.

However the partners agreed that despite the stake dilution, the Italian company will retain a blocking stake in SCAC until 2017 when Finmeccanica invests not less than $390 million to regain its share.

Finmeccanica itself is undergoing restructuring process in the course of which the group will have its name changed to Leonardo and it intends to shake off its loss making projects, Sukhoi Superjet 100 named among them.

In 2014 SCAC rolled out 35 SSJ 100 aircraft but a year later the production volumes dropped to 17 aircraft. The airframer plans to manufacture 27 aircraft this year. According to Denis Manturov, Russia’s minister of industry and trade, SSJ 100 aircraft production output is planned at 34 aircraft for 2017 reaching 40 aircraft in 2018.