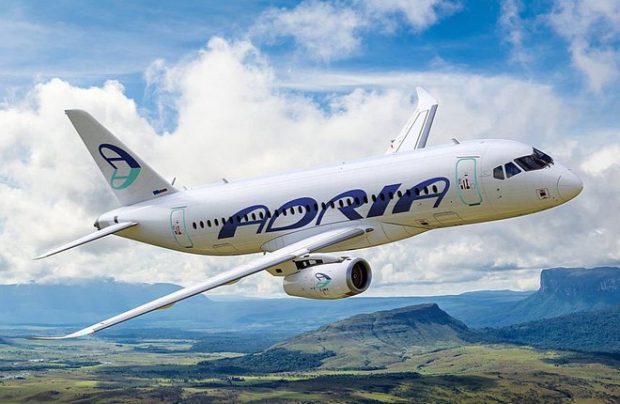 Slovenia’s Adria Airways – and its German-run owner 4K Invest – have signalled a move towards a possible strategic relationship with Russia’s Sukhoi Civil Aircraft Company (SCAC), by expressing an intention to lease 15 Superjet aircraft whilst also establishing a joint SSJ100 maintenance, repair and overhaul (MRO) business for the type in the central European republic.

The Ljubljana-based carrier, currently an operator of western-built predominantly regional aircraft, has signed a Letter of Intent (LOI) with Sukhoi Civil covering 15 Superjet 100 aircraft. In addition, the parties have inked a Memorandum of Understanding (MoU) to establish a joint MRO venture for the SSJ100 at Ljubljana Airport, reveals Denis Manturov, the Russian Federation’s minister of industry and trade. Aircraft deliveries will commence as early as “the beginning of 2019, under a long-term lease arrangement,” the minister adds.

SCAC president Alexander Rubtsov, Holger Kowarsch who is chief executive of Adria Airways and Dr Martin Vorderwulbecke, managing director of AA Aviation (a 4K Invest company), have all indicated that the signed papers open a new chapter towards “a strategic relationship between the parties”, a SCAC statement reads. The Slovenian airline, which claims to have been evaluating the Superjet 100 since 2016, believes the Russian-built regional aircraft “will totally support” Adria Airways´ development strategy.

“During the past two years we have been analysing the SSJ100 type and have come to the conclusion that all the technical and operational characteristics of this aircraft would best suit our strategic goals,” says Kowarsch. He also adds that the introduction of the SSJ100s would release more of its Bombardier CRJs and Airbus aircraft for outsourced ACMI (aircraft, crew, maintenance and insurance) operations.

Addressing the issue of the SSJ100’s international operator concerns over poor after-sales support and the type’s ‘childhood diseases’, the manufacturer has agreed to set up the MRO joint venture with the Slovenian flag carrier at its base. “We realise that the SSJ100 after-sales support at the entry to the European market must be organised profoundly and professionally. Together with Adria Airways we will create a joint maintenance and repair organisation for the SSJ100 at Ljubljana Airport. That service platform will secure the operational reliability of the SSJ100 aircraft in Europe,” SCAC’s Rubtsov states.

In September, Belgium’s Brussels Airlines announced that it is not extending its Superjet 100 wet lease contract with service provider Ireland-based CityJet, citing ‘challenging maintenance’ issues. Mexican airline Interjet has 22 of the Russian-built jets, with only 12 currently operational.