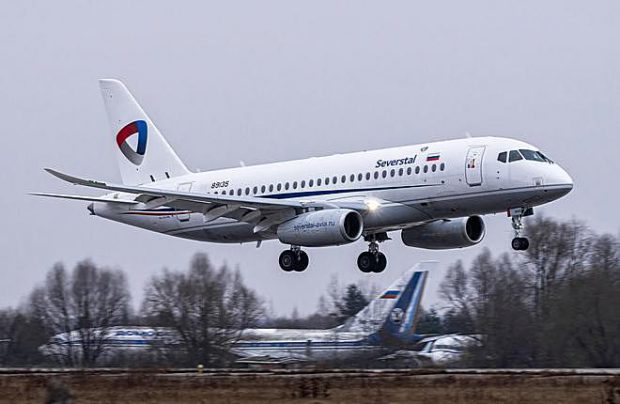 The aircraft with the sabre-shaped winglets (‘saberlets’), with serial number 95181 and the registration RA-89135, was produced in 2019 and is being delivered to the Cherepovets-based carrier under a lease contract with Russia’s State Transport Leasing Corporation (GTLK).

“I have witnessed the aircraft’s capabilities, and I’m just thrilled,” enthuses Vadim Priymak, deputy squadron commander at Severstal, who shared his impressions after the acceptance flight. “Severstal has been operating the Superjet 100 for just one year. At first, during my type-rating training I was, to be quite honest, a little sceptical about this aircraft. But the more I fly it, the more I feel for it. There’s nothing specific about piloting the winglet-equipped SSJ100. The airplane is easy to handle in all flight modes. I’m sure [overall] adaptation to the saberlet-equipped aircraft will be smooth.”

According to Nikolay Ivanovsky, Severstal Airlines’ general director, the addition of saberlets will improve the SSJ100’s ecological footprint, “which is particularly important considering our plans for expanding our international route network.”

Additionally, reveals SCAC’s general director Ravil Khakimov, winglets will save airlines “up to 10 million roubles per-year, per-aircraft,” which corresponds to approximately one month’s lease payment for one aircraft. “SSJ100 operators can reduce their fuel costs by at least four per cent. And notably, the new design feature has not [materially] affected the weight of the aircraft, because the winglets are made of [lighter] composite materials. Besides the increased fuel efficiency, saberlets also improve the aircraft’s runway performance and significantly reduce noise levels,” comments Andrey Nasedkin, SCAC’s deputy general director of design.

In other advantages, Saberlet-equipped aircraft provide an increased MTOW in hot-and-high environments, as well as improved performance on short runways. Finally, because of lower thrust requirements, the winglets provide conditions for saving on engine maintenance costs, SCAC insists. They enable the use of a ‘flexible take-off thrust’ function in which lower thrust can be selected during take-off.

As Leonid Chikunov, SCAC’s first deputy chief of flight division and test pilot, summarises: “From the piloting standpoint, the winglet-equipped aircraft is very similar to one without winglets. But with the saberlets, the aircraft’s aerodynamic properties are somewhat improved, as well as its manoeuvring characteristics and fuel burn.”

Since the Superjet 100 can be fitted with saberlets not only in series production, but also for those in current operation as well, the airlines will be able to perform the retrofit themselves during regular maintenance under Service Bulletins. The Service Bulletin covering the installation of saberlets on earlier produced aircraft has already been developed and issued by SCAC. Saberlets will be manufactured and installed at SCAC’s production facilities.

The horizontal winglets’ Major Change Approval certification obtained by the OEM allows for the deliveries of such aircraft to Russian customers only.