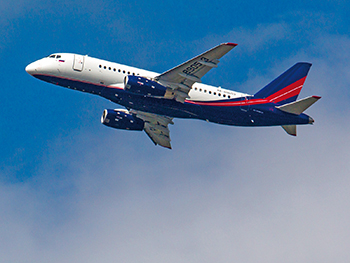 Sukhoi Civil Aircraft Corporation (SCAC) is demonstrating at this year’s MAKS its Sukhoi Business Jet (SBJ), Russia’s first airliner aimed exclusively at the bizav market. Based on the SJ 100 passenger aircraft, the first SBJ was shown in Zhukovsky two years ago with a demo interior. Its passenger cabin customization was completed in 2014 and is fitted with a VIP interior from Russian Aero Style specialist. The aircraft has been in service with the charter operator Center South in the interest of government agencies.

SCAC says the SBJ’s price tag will be lower than those of the comparable Boeing, Airbus, and Embraer products. “The SBJ will be priced around $10 million lower than the [closest rival Embraer] Lineage 1000,” the company press service reports. However, the Lineage 1000 price starts at $43 million, whereas the SSJ 100 baseline was offered for $35.4 million back in 2012, meaning that the SBJ’s price should be comparable to that of the passenger version.

The business airliner segment is the narrowest one on the bizav market. According to the Web resource JetNet, the global business jet fleet stands at over 29,000 aircraft, whereas there are only slightly more than 360 business airliners in operation. General Aviation Manufacturers Association (GAMA) reports that Airbus delivered five such aircraft in 2014; Boeing — 10; and Embraer — only three.

SCAC says it is planning to deliver four to five SBJ airliners per year. The Russian manufacturer is eyeing both the domestic and the international markets, primarily in Southeast Asia and the Middle East. According to the Bombardier Business Aircraft forecast for 2015-24, 400 and 310 business aircraft will be delivered to these regions respectively. The leading market will be China which is expected to see 875 deliveries. If will be followed by Latin America with a demand for 850 new business aircraft.