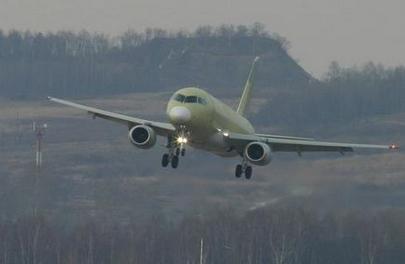 The stretched version of the Sukhoi Superjet 100 (SSJ 100) will be certified in 2019 and enter market a year later, Ilya Tarasenko, president of Sukhoi Civil Aircraft Comany (SCAC),  told The Expert magazine. Earlier, in October, Yury Slyusar, the head of SCAC parent company United Aircraft Corporation, named 2018 as the projected certification year, and 2019 as the year when the new Russian jet should enter the market.

The SSJ 100SV program is at the design definition stage, which should be completed in March, Tarasenko explained. After that, SCAC will make a presentation for the potential customers and start negotiating contracts. The OEM is intending to provide a high level of commonality with the baseline model to ensure the program’s “optimization in terms of technical solutions and financial input,” he said, adding that the company will invest a total of 11-24 billion rubles into the program, from the R&D phase to pre-production processes.

The previous development schedule for the stretched SSJ, which implied certification in 2018 and entry into service in 2019, was announced by Slyusar in October 2015.

The SSJ 100SV will receive a new wing with a higher aspect ratio for increased lift. It will seat 110-125 passengers. SCAC expects  to sell at least 140 such aircraft by 2031. The aircraft’s main competitors are the Bombardier CSeries and the Embraer E-Jet E2.

SCAC has all its production slots contracted for the next three years, Tarasenko said. The OEM is planning to have delivered 27 SSJ100s in 2015, including the 20 already been delivered to their respective customers: Mexico’s Interjet and Aeroflot received six each; Red Wings got five (including one pre-owned); and one airframe went to Gazpromavia. One other aircraft, destined for Comlux (Switzerland), is currently being customized. Yamal Airlines will not receive two aircraft this year, contrary to previous announcements.

In October 2015, Dmitry Bloschinskiy, director of SCAC’s affiliate plant in Komsomolsk-on-Amur, told the media that plans for the year called for building 17 aircraft, compared to the 37 built in 2014. He explained the production slow-down by the need to coordinate production plans with the firm order backlog.

SCAC has revisited its forecast for the SSJ 100 family production rates through to 2031, bringing it down to 595 aircraft from the initial 830. Of these, 82 will be in the baseline version, 331 in the Long Range variant, 42 in the Sukhoi Business Jet (SBJ) configuration, and around 140 will be stretches.