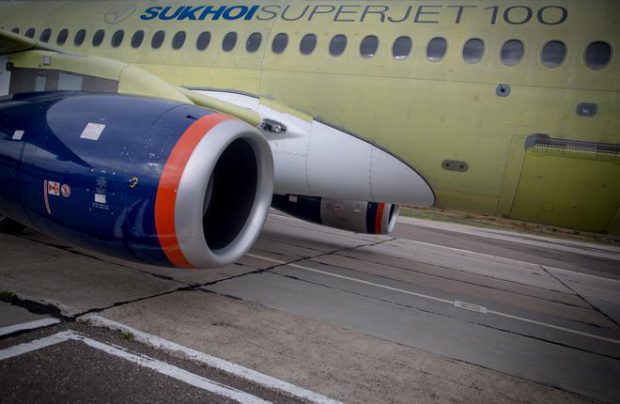 Russian holding RT-Chemcomposite (Chemical Technologies and Composite Materials, part of Rostec) has launched serial production of upgraded sound-absorbing liners for PowerJet SaM146 turbofan engines, which power Sukhoi Superjet 100 (SSJ 100). A company spokesperson told Russian Aviation Insider that the new liners reduce noise levels as much as 50% compared to the old ones. They will be installed on all new engines. The engines already in service will be retrofitted with the kit later on.

The upgraded liners have been replacing the original structure developed and produced by RT-Chemcomposite since 2014. They are fully compliant with the new EASA noise regulations and are more resistant to mechanical stress. The producer did not disclose the performance characteristics, but explained that the new liner is a multi-layered cellular resonance-type structure made of composite polymers (unlike the previous metal structures). No changes in the design of the engine nacelle will be necessary, because the liners, located right behind the fan, are removable, OEM’s spokesperson explained.

The new liners were designed following EASA’s more stringent certification requirements. RT-Chemcomposite launched serial production after an audit of the SaM146 producer, PowerJet (a joint venture between NPO Saturn and Safran Aircaft Engines). According to RT-Chemcomposite’s general director Kirill Shubenkov, several hundred of the new kits will be produced. The first five are expected to be ready by October this year. He did not specify the production rate. However, in 2014 the company produced 100 kits of the old liners.

RT-Chemcomposite is planning to use the technological solutions developed for the SaM146 noise abatement liners for future projects, including the PD-14 engines for the MC-21 aircraft.