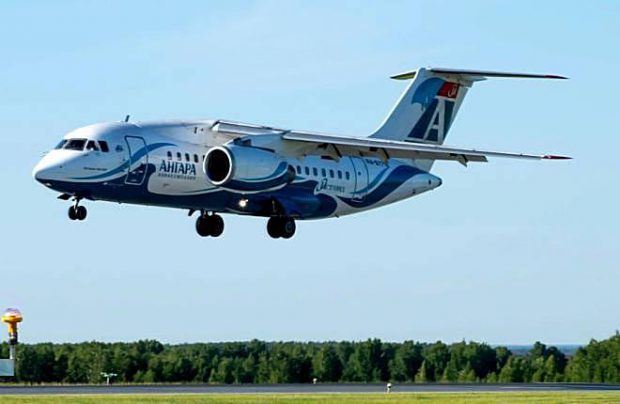 Angara Airlines, best known for being Russia’s only commercial operator of the Antonov An-148 regional jet (Angara)

Small regional airline Angara, which operates flights in eastern Siberia, was the only Russian carrier to improve its year-on-year operational performance in April, despite the on-going Coronavirus pandemic, claims RBC outlet. On average, across the Russian airline industry, passenger numbers declined 12-fold due to quarantine restrictions and a slackened demand for air travel.

Irkutsk-based Angara, which is owned by the former governor of Irkutsk region, saw its traffic increase by 50 per cent, from 31,900 passengers in April 2019 to 47,900 last month, according to preliminary data compiled by Russian aviation authority Rosaviatsiya, as reported by the RBC.

According to Rosaviatsiya, Russia’s collective airline traffic plummeted by 91.8 per cent — from 9.3 million passengers in April 2019 to just 771,000 for the same month of this year. The average seat load factor for the same period decreased from 81.5 to 37.6 per cent. Virtually the entire major Russian airline industry was hit hard by the Coronavirus pandemic, with all the leading airlines suffering massive declines in passenger numbers.

Against this backdrop, in April Angara climbed from 19th to fifth place in the ranking of Russian airlines by traffic, in doing so surpassing the much larger Ural Airlines, which saw traffic decrease by 94 per cent to 41,700 passengers in the period. For the first four months combined, the number of Angara’s passengers remained level with the previous year at some 122,000.

Regional travel, and in particular those routes where state subsidies apply, have now proven to be better protected than scheduled commercial air travel even on the most popular routes between the largest city pairs, like Moscow and St Petersburg.

Angara, best known for being Russia’s only commercial operator of the Antonov An-148 regional jet, is part of the Eastland Group, which is also involved in the production, construction and tourism industries and is owned by Sergey Eroschenko (75 per cent) and his son Vladimir (15 per cent). The former served as governor of the Irkutsk region between 2012 and 2015.

Headquartered at Irkutsk, Angara Airlines is a dedicated regional carrier of the Irkutsk region’s administration. Its mixed fleet of 37 aircraft includes seven An-24s, three An-26 turboprops, five newer-generation An-148s and Mil Mi-8 helicopters, all operated across the Irkutsk region of Siberia and the far eastern federal district. It also performs charter flights across Russia, as well as some special missions, such as patrolling power-lines and oil pipelines, and also serves as a search and rescue squad for Irkutsk airport.