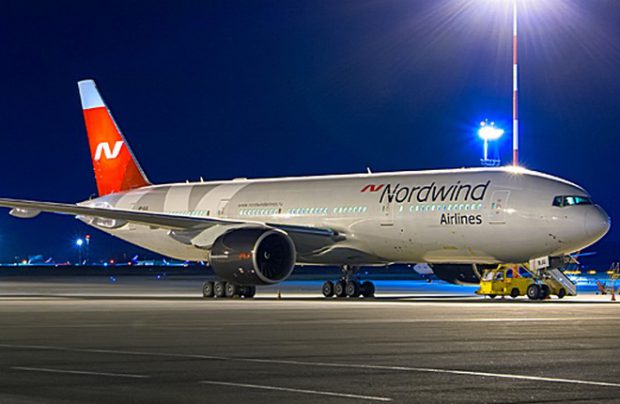 The previous and only operator of the B777-200ER produced in 2006 (serial production number MSN 32718) was the Mexican airline Aeromexico. The latest addition to the NordWind fleet has been designated the registration number VP-BJG and is powered by GE90 engines.

Designed to carry up to 277 passengers, the long-haul airliner has, for its new operator, an unusually large business-class cabin, with seating for 49 passengers. The aircraft began revenue service for NordWind by performing a flight from Moscow to the Thai resort of Phuket on April 11.

“We are happy to say that we are following the upwards trend of air transport passenger numbers currently being experienced in Russia and we are committed to maintaining our own pace of development, providing passengers on board with not only high-level services, but also increasing the mobility of the population through the use of modern high-capacity airliners,” states Imran Nazarov, NordWind’s commercial director.

The airline plans to inaugurate additional long-haul destinations, and will therefore continue to increase the number of its wide-body aircraft in 2018, with the delivery of another former Aeromexico B777-200ER expected in the near future.

In 2017, NordWind rose to ninth place in terms of passenger numbers among Russian airlines, after almost doubling its passenger traffic compared to 2016, serving 3.5 million customers.

Its progress accelerated even further this year, with 643,000 people carried during the January-February period, 2.5 times more year-on-year.

With a route network which now includes more than 200 destinations in Russia and internationally, its scheduled flights are performed from Moscow’s Sheremetyevo airport.

Of particular note is the fact that NordWind has the biggest direct route network among all Russian airlines out of Crimea’s Simferopol airport, providing 27 Russian cities with regular air service connections.