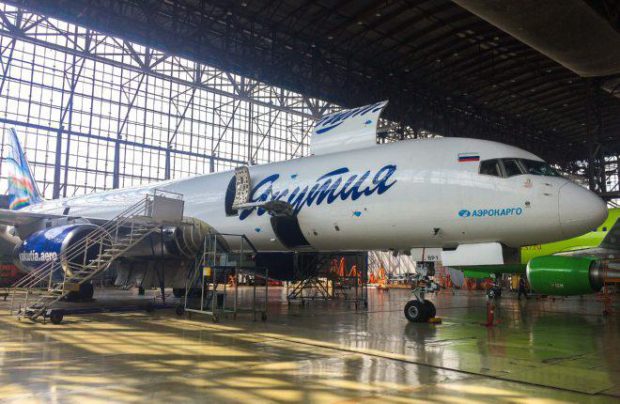 Sibir Technic, Novosibirsk-based MRO center of the Engineering Holding has  performed its first ever periodic maintenance procedure on a Western-built freighter aircraft, a S4C-Check on a  Boeing 757-200PCF. The aircraft with tail number VQ-BPY is operated by Russia’s Yakutia Airlines in the interests of Aerocargo+ logistic company. This also marks the first time the MRO on this aircraft has been done in Russia, as the operator earlier opted to ferry its aircraft abroad for MRO procedures.

S4C-Check includes maintenance and inspection of an aircraft’s primary structure, and is done every 72 months, or when an aircraft reaches 12,000 TOL operations. Sibir Technic completed the works on the Boeing 757-200PCF in 17 days, strictly within schedule. Straight after that the aircraft operated a commercial flight.

Sibir Technic is the only Russian MRO provider that performs heavy maintenance on Boeing 757-200. Such airlines as Royal Flight, IFly, Azur Air, VIM-Avia, and Kazakhstan’s Defense Ministry trusted the Novosibirsk provider with maintenance of their passenger aircraft.

“For the first time in my experience everything was 100% complete. It is quite common practice, for most providers we have worked with before, Western ones included, that something remains undone, or that some problems manifest themselves at some point. In case with Sibir Technic, everything was done fantastically”, Aerocargo’s deputy general director for engineering, Mikhail Trifonov told Russian Aviation Insider.

The previous heavy maintenance check was done on Aerocargo’s 757-200F at the premises of HAECO (Hong Kong Aircraft Engineering Company) in China.

“At the bottom-line, Sibir Technic’s competences in a number of ways exceed those of HAECO. I appreciated the quality of Novosibirsk technicians’ work on the structural elements. The painting is also done differently, so now our freighter looks like a shiny toy,” Trifonov shared.

The customer made a decision to contract the Russian provider after witnessing the quality of work done on the Boeing 757-200s operated by Royal Flight and iFly while visiting the hangar facilities at Novosibirsk Tolmachevo airport, he explained.

Having the maintenance procedures on the aircraft done in Russia saved the operator a weighty amount. “Although the cost of work was similar with that of HAECO’s, we definitely saved on ferrying the aircraft. The aircraft made a commercial flight to Novosibirsk and stayed for maintenance. Flying to China takes twice as long, and we couldn’t fly cargo there. We would also incur expenses for accommodating our staff in China”.

“The way spare part logistic is done at the Engineering Holding is one of the most efficient in Russia, I think. For all of the components delivery time never exceeded five days, most were delivered in three or four days, and everything was exactly on time. The spare parts were delivered to Novosibirsk from Moscow with scheduled passenger flights, so we knew exactly when they would land at Tolmachevo,” Trifonov explained. He also mentioned certain difficulties that Chinese providers face in this respect. “Deliveries from the US to China take a long time. They say a week or a week and a half, but after all you find out there had been some complication with the customs.”

According to Trifonov, there are hardly any EASA-approved component repair shops in China. “For instance, Goodrich or Honeywell equipment maintenance is done under Chinese certificates, which is not acceptable for our Bermuda-registered aircraft. We need EASA-approved workshops.

Speaking of his recent experience with Sibir Technics Trifonov referred to his past tech career at Russsia’s national carrier Aeroflot, where he worked with Western MRO providers. He claimed that the Russian provider is equal in quality to such prominent MRO providrs as Air Atlanta Gatwick, Lufthansa Technik, Air France Industries KLM Engineering & Maintenance and Finnair Technical Services.

“In terms of quality control Novosibirsk staff are more stringent than Europeans, and, definitely, the Chinese,” Aerocargo’s executive summarized.