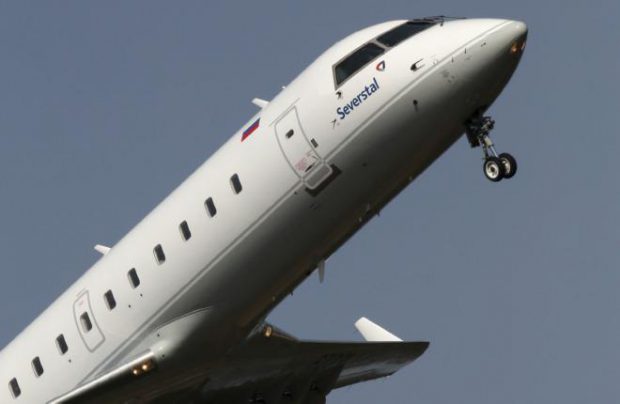 Russia’s Severstal Air Company, which is owned by the eponymous mining and steel giant, expects to add more capacious aircraft to its fleet by the summer of 2019. The carrier, which ranked the country’s 28th by traffic last year with 240,000 passengers (up 9% on 2016), currently mostly operates 50-seat Bombardier CRJ200 regional jets on scheduled flights.

A senior manager of the airline told Russian Aviation Insider that the seats on the CRJ200s are filling quite well; the load factor reached 63.1% last year, a 16 p.p. improvement on 2016. This has led the operator to ponder further business growth, and it is now looking to add more capacious airliners by the beginning of summer operations in 2019.

No final decision has been made on the type. The list of candidates includes larger Bombardiers, such as the CRJ700/900, Embraer jets, and the Sukhoi Superjet 100.

“The new aircraft will be acquired for further development of our network from Cherepovets airport and across the entire northwestern region of Russia,” the source said. Cherepovets airport is also managed by Severstal; it welcomed 65,000 passengers in H1 2017 (no fresher data has been available from the Federal Air Transport Agency). “We are calculating every step of our development, and we launch new flights without any rush. We have an ambition to become the leading carrier in the Northwestern Federal District.”